Home Get Involved Volunteer Volunteer Appreciation Month Full of Life, Hope and Aspirations – Survivor, 34, Volunteers and Raises her Voice for Those Who Can’t 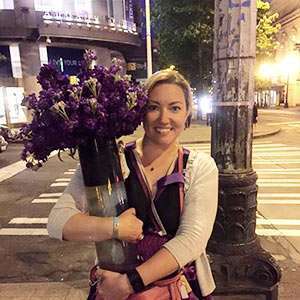 Liz Jurcik after the Celebration of Hope gala in 2015 in Seattle, a fundraiser event put on by the volunteers in her local Puget Sound Affiliate.

Her dad was a gastroenterologist. He loved everything about his job.

“Except for the times he had to tell a patient they had pancreatic cancer,” Elizabeth Jurcik of Bellevue, Wash., said. “I was young, but I still remember the crestfallen look on his face when he’d talk about telling a patient they had just a few months to live, and that they should try to enjoy every moment with family and friends.”

Her dad passed away when she was 15, but some memories stick with Jurcik, and that’s one of them.

Jurcik was a healthy, active 31-year-old with a stomachache that wouldn’t go away. Early in the morning on Feb. 11 three years ago, she went to the emergency room. After an abdominal ultrasound and some bloodwork, the ER doctor diagnosed her with acute pancreatitis and sent her upstairs, where she met the attending physician. The physician took one look at Jurcik and quickly said, “This isn’t right. You shouldn’t have this.”

That doctor’s questioning of Jurcik’s pancreatitis diagnosis changed the course of her life, because that uncertainty led to a CT scan that revealed a mass. An MRI confirmed the observation, showing the same mass, a little more clearly, in the body of the pancreas.

Jurcik remembers still being composed until she overheard someone refer to the mass as a tumor. “I called my mom in tears and told her I was afraid I was dying,” she said.

After a biopsy, the pancreatic gastroenterologist called with the kind of news that’s rare in the pancreatic cancer community. He said, “I have good news and bad news. The good news is that you’re going to live. The bad news is that you have to have the tumor removed ASAP. You’ve got an abnormal mucinous cystic neoplasm (MCN) and while the news could be much worse, I’m very concerned.”

Right away, she underwent a distal pancreatectomy to remove the mass and 55 percent of her pancreas. The tumor was analyzed and sure enough, it was an MCN with evidence of very early cancerous growth.

“My prognosis was very good, and I thank my lucky stars every day that I had a team that wouldn’t stop asking questions and a tumor that just happened to grow in a spot where I’d get very early symptoms.”

Jurcik knows her story is different than most. She was (and still is) young.

But she’s full of life, hope and aspirations. She’s passionate about early detection methods, specifically bringing focus and attention to the under-studied atypical pancreatic tumors. MCNs are female-specific; Jurcik wonders, “If I have a daughter, will she be at risk for the same thing and at such a young age, as well? I have yet to meet another survivor of my kind of pancreatic cancer because like all the others, it’s typically found much too late. There has to be a way to find this cancer earlier.” 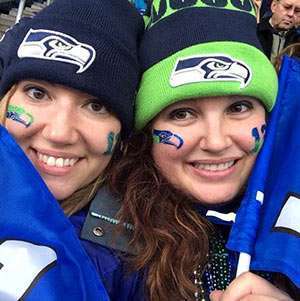 Liz Jurcik (left) and her friend, Hilary, pulling for the Seattle Seahawks during football season. Jurcik is a three-year pancreatic cancer survivor.

She often tells people, “I am a pancreatic cancer survivor, and hopefully I have a chance to fight for a cure for the next 50-plus years. Believe me when I say there is hope. I am one of the few who can stand here today and over the coming decades to show you just how much life we ALL have left to live.

“I won’t rest until my community of survivors has a fighting chance to make it through this and join me for five-plus decades, too.”

Today Jurcik is the volunteer Media Relations Chair for the Puget Sound Affiliate in Seattle, which means she helps spread the word through local news media about the importance of raising more awareness about pancreatic cancer. She said she enjoys it because she can speak from a place of hope, and perhaps do so for others who haven’t had the same chance she is getting.

“For those of us who have heard the word ‘tumor,’ and who are able to raise our voice, we need to scream to make sure this disease gets the attention it deserves. We need to be loud.”

Before she started volunteering, Jurcik said she felt like she was on an island. She had been told her case was “simple” – she just needed a surgical resection and she’d be good to go. But as much as friends and family tried to understand her perspective, they really couldn’t.

“I joined our volunteer affiliate and right away met another pancreatic cancer survivor, who has since become a good friend,” she said. “We traded stories about surgery, recovery, the things we can’t eat anymore and how even a ‘simple’ case changes your life.

“I get such joy from volunteering – I’m having a blast! I’d strongly encourage others who want to make connections to also volunteer. I’m learning a new set of skills that I don’t get exposure to in my career, I’m fighting for a cause dear to my heart and I get to be around incredible, inspirational, passionate people.

“Who can ask for more than that?”

Do you have pancreatic cancer, or do you know someone who does? Contact PanCAN Patient Services and speak with one of our knowledgeable, compassionate, highly trained Case Managers.