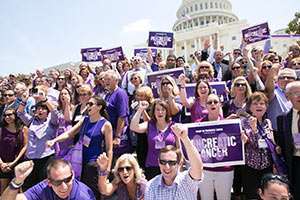 Nearly 500 advocates from all 50 states descended on Capitol Hill on June 17 for the Eighth Annual Pancreatic Cancer Advocacy Day. On the same day, about 900 additional supporters joined the National Call-In to intensify the impact of the advocates on the Hill. Both groups delivered the same message to their Members of Congress: Stomp on Pancreatic Cancer by stepping up federal research funding! 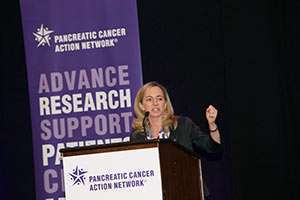 Julie Fleshman, Pancreatic Cancer Action Network President and CEO, inspiring the crowd before their departure for Capitol Hill on the morning of Advocacy Day

Advocacy Day and the National Call-In were a phenomenal success by all accounts. After spending a full day training and preparing for their Hill meetings, advocates took to Capitol Hill with their purple bags in hand and their personal stories as ammunition. In less than eight hours, those advocates attended over 320 meetings, including appointments with every Senate office. While the House and Senate meetings were taking place, nearly 2,400 phone calls from volunteers across the country flooded into congressional offices. In total, supporters reached approximately 400 offices on June 17, making their voices heard throughout the halls of Congress.

Advocates told Congress that funding for the National Cancer Institute (NCI) was critical in order for the agency to leverage the opportunities created by the passage of the Recalcitrant Cancer Research Act in 2012. After listening to advocates’ stories, most Members and their staff voiced support for cancer research. Two lawmakers went a step further and took to the floor of the U.S. House to express their support for increased research funding. See videos of their impassioned statements here and here. 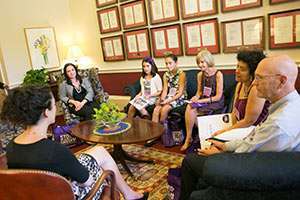 The advocates’ second ask of Congress was that they continue to include pancreatic cancer in the Department of Defense’s Peer-Reviewed Cancer Research Program (PRCRP), which provides research funding for a select number of cancers. The timing was perfect. On June 20, three days after Advocacy Day, the U.S. House passed a defense bill that included pancreatic cancer in the PRCRP. The only caveat was that the House cut funding for the program – from $25 million to $15 million. So advocates are now asking the Senate to ensure that the PRCRP receives at least last year’s funding level of $25 million. 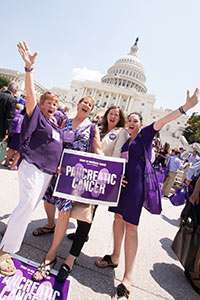 The final request on Advocacy Day was for congressional staff to attend a briefing that the Pancreatic Cancer Action Network was co-hosting two days after Advocacy Day with the new bipartisan Congressional Caucus on the Deadliest Cancers. The topic of the briefing was the Pancreatic Cancer Action Network’s recently published report showing that pancreatic cancer will become the second leading cause of cancer-related death by 2020 and that liver cancer, another deadly disease, will be number three by 2030.

The speakers at the briefing included the caucus co-chairs, Representatives Leonard Lance (R-NJ) and Anna Eshoo (D-CA), a representative of the National Cancer Institute and Lynn Matrisian, the Pancreatic Cancer Action Network’s Vice President of Scientific & Medical Affairs. Thanks to the efforts of the advocates on Capitol Hill, more than 100 staff members from 87 offices attended the briefing, overfilling the room well beyond capacity. Several staff were even standing in the hallway to listen to the speakers. In the ensuing days, 20 Members of Congress joined the caucus! Check here to see if any of your Members have joined. 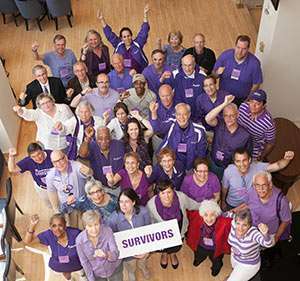 This year’s Advocacy Day has shown once again that when the Pancreatic Cancer Action Network’s supporters are united in advocating for more research funding and telling Congress their stories, Congress listens. The next step is to keep up the pressure and follow up to ensure that Members of Congress maintain their support when it comes time to vote.

Continue the drumbeat by sending an email to your Members of Congress, getting others involved as advocates, and participating in the At-Home Challenge this August (see next month’s newsletter for more information). More action and more advocates will persuade Congress to Stomp on Pancreatic Cancer!

We deeply appreciate the support of our Advocacy Day sponsors.

More Advocacy Day Photos
Use the arrows to the left or right of the photo to scroll through the collection.