Home About the Pancreatic Cancer Action Network Pancreas Matters email newsletter archive For Survivor and Rock Band Bassist Chuck Reed, Music Is an Elixir with the Power to Transform and Heal

A social media campaign called “Play On,” created by Reed’s longtime friend and Community Ambassador Kevin Canafax, calls upon the community to lend their voices to raise awareness and funds for pancreatic cancer.

“I’m looking into getting a purple bass [guitar],” Chuck Reed said to his friend Kevin Canafax just a few weeks ago.

It made sense – Reed is a veteran bass player for well-known Cincinnati, Ohio, rock cover band DV8. He is also a stage 4 pancreatic cancer survivor.

While the disease has certainly slowed him down since his diagnosis in February, it has hardly squelched his passion for music. And to him, a purple bass was the ticket to bringing more awareness about pancreatic cancer to the band’s multitude of dedicated fans. 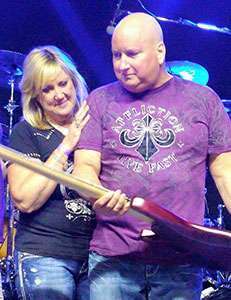 Little did he know that Canafax was one step ahead of him – Canafax had already contacted a longtime mutual friend of both of theirs, Dave Miller, and placed an order for a custom-made, one-of-a-kind bright purple Roscoe bass guitar for Reed.

He also had a special place in mind to present it to him.

On the evening of May 8, standing on a stage in front of an audience of over 1,000 friends, family, acquaintances, DV8 fans, community members and local volunteers from the Pancreatic Cancer Action Network’s Cincinnati Affiliate, Reed was moved to tears as he was presented the surprise gift.

Reed wasn’t on stage solely to perform in concert that night. Rather, he was the guest of honor at an event held to celebrate him and to launch an awareness and fundraising campaign benefiting the Pancreatic Cancer Action Network. Four local bands, including DV8, rocked the venue into the wee hours of the morning. Reed summed up the special evening by calling it one of the best nights of his life, and receiving the purple guitar was the highlight.

“I play a six-string bass,” he said, “but I had to stop playing mine because I couldn’t support the weight of it all night on stage. The purple bass was designed just for me with lightweight materials and weighs only five pounds. Thanks to Kevin and the generosity of close friends, I am now able to play six strings again.”

The campaign, driven by social media, is formally called “Be Strong, One Song, Play On,” and it was Canafax’s idea. It came to him soon after Reed’s diagnosis, when he and his wife saw Reed perform in concert with DV8. He was giving it his all on stage, but the disease had clearly taken its toll.

“I could tell Chuck was struggling, but at the same time, I was blown away by his passion, energy and dedication,” Canafax recalled. “His performance reminded me that music is an incredible motivator and a powerful force. Chuck was enthusiastic and happy while he was playing that night, despite having just been handed a pancreatic cancer diagnosis. It was as if the music had transformed him. Music has a healing power – it’s an elixir.”

To Canafax, “Play On” is a fitting campaign theme.

“It means that no matter what someone is dealing with in life, they should try to play on … to keep doing the things that drive them … the things that give them passion and energy.”

At the tribute event, guests were encouraged to record videos of themselves singing, saying or playing “Be Strong, One Song, Play On” and then to share the videos via social media, while challenging their contacts to do the same.

Though the viral campaign was originally intended to target musicians, everyone is encouraged to participate.

“We’d love to see an ‘Ice Bucket Challenge’-type of response to this campaign,” Canafax said, referring to last year’s mega-successful, grassroots-inspired viral fundraiser for the ALS Association. “Or,” he added, smiling but nonetheless serious, “I’d also love to see Sir Paul McCartney sing it, say it or play it!”

Canafax and a team of volunteers have created a fundraising web page to support the campaign, with donations benefiting the Pancreatic Cancer Action Network, at www.firstgiving.com/fundraiser/playon. And a hashtag has been created to drive further awareness on social media – #playon.

Canafax created the “Play On” campaign as a Community Ambassador for the Pancreatic Cancer Action Network. Anyone who’d like to host an event, set up a mutually beneficial cause-marketing campaign or participate in an athletic event as a way to raise funds and awareness for the organization can take part in the program. 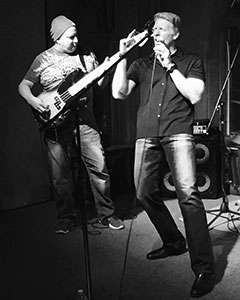 Chuck Reed, left, and Kevin Canafax perform together. Canafax started the “Play On” pancreatic cancer awareness campaign for Reed, who had just been diagnosed with the disease.

When Canafax shared his vision for the campaign with Reed, Reed was immediately onboard.

Said Reed: “I’m grateful that Kevin had thought about how we could take my very personal and devastating situation and turn it into something that would have a positive impact on the pancreatic cancer community.”

This is not the first time Reed, 59, has battled a heavy-hitting cancer. He was diagnosed with colon cancer three years ago but emerged post-treatment with a clean bill of health. Everything had returned to normal until he and his wife, Melissa Reed, and their children, Lee (20) and Madison (14), were out of town for spring break in 2013 and he experienced severe pain in the left section of his abdomen. Doctors first suspected pancreatitis and then later pointed to his gall bladder as the source. But even after his gall bladder was removed, he still felt sick and began losing significant weight – close to a pound a day. Doctors discovered that his pancreas had doubled in size, and he was diagnosed with pancreatic cancer this past February.

The Reeds reached out to PanCAN Patient Services at the Pancreatic Cancer Action Network and gained a lot more information about his “sneaky, unwelcome intruder,” as Melissa Reed refers to the disease.

“PanCAN Patient Services provided good information for me, as Chuck’s caretaker,” she said. “It was helpful to understand the symptoms and side effects so I could help him manage those issues.”

Soon after his diagnosis, Reed began chemotherapy. After completing six treatments, a CT scan showed “miraculous” tumor shrinkage, according to his oncologist. Today Reed is on a chemotherapy-radiation regimen, which he will complete by the end of June. The Reeds are hopeful he will then be eligible for surgery to remove the tail of his pancreas later this summer.

Throughout their pancreatic cancer journey, music has helped and inspired the couple. Said Melissa Reed, who is lead singer for DV8, “We know it’s a long road, but through music – the thread that binds us all and that makes us feel better when we’re going through happy and sad times – this experience has been more positive than we could’ve ever hoped for.”

Chuck Reed echoed that belief in the necessity of music to get through difficult times.

“Right now, it gets me through the day. When I go to chemo, I listen to music the entire time as an escape. There’s a magic in music. I find strength in its power.”

The Reeds have much to look forward to this year. They will gather with family and friends, as well as other local bands, to participate in PurpleStride Cincinnati in September. They’re forming a team – Team Chuck – and may even serenade PurpleStride participants with a few classic rock sets on stage.

In the meantime, the Reeds are looking forward to opening with DV8 for The Doobie Brothers when they perform in Cincinnati this summer.

Chuck Reed will be the one with the purple bass.

For more information about “Play On,” visit www.firstgiving.com/fundraiser/playon. If you’d like to Wage Hope by raising funds to support the mission of the Pancreatic Cancer Action Network through our Community Ambassador program, visit www.pancan.org/communityambassador or call 877-272-6226.