The year was 1998, and after a decade of medical training, the future was uncertain for Michael Goggins, MD. His goal was to remain at Johns Hopkins University, where he would soon complete his clinical fellowship in gastroenterology and hepatology, and start up the first early-detection research laboratory for pancreatic cancer in the country. However, he was lacking the funding and resources necessary to establish and maintain the lab, and he was starting to think about going elsewhere. 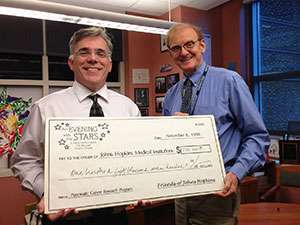 Dr. Goggins (left) and his colleague at Johns Hopkins, Ralph Hruban, MD, happily display the check from the first An Evening with the Stars gala in 1998, which allowed Dr. Goggins to launch the first early-detection pancreatic cancer research lab in the country.

During the same time, Pamela Acosta Marquardt, who had lost her mother to pancreatic cancer, was searching for a significant way to honor her mother’s memory. She found online one of the only resources available for pancreatic cancer patients and their caregivers, a discussion board maintained by Johns Hopkins University Medical Center. There, Marquardt learned of Dr. Goggins’ difficulty. She decided to host a gala, An Evening with the Stars, to raise money to support Dr. Goggins’ research.

“I could hardly tie my bowtie,” remembers Dr. Goggins. “I didn’t know anyone, but we all pitched in to help put up signs and set up the event.” The gala turned out to be a fabulous success, and the necessary funds were raised to start Dr. Goggins’ lab.

“Raising the money to ensure that Dr. Goggins could pursue his research efforts was one of my proudest moments,” said Marquardt. “I was devastated by the loss of my mother, and I felt betrayed that there were no resources available and no national organizations that were focused on fighting this disease. I knew I had to do something.”

Marquardt went on to found the Pancreatic Cancer Action Network in honor of her mother in 1999 and continued the An Evening with the Stars event for a number of years. 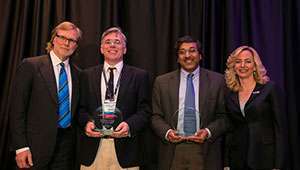 Fast-forward to 2013, when the Pancreatic Cancer Action Network was offering, for the first time, two $1 million Research Acceleration Network (RAN) Grants. These grants support multi-institutional projects that have a clinical component with clear potential to double pancreatic cancer survival by 2020. Following a highly competitive and rigorous peer-review evaluation of the applicants and their projects by leading experts in pancreatic cancer research, Dr. Goggins was named the principal investigator for one of the grants awarded, providing him and his collaborators with funding for three years. His team’s RAN Grant was funded in honor of the legacy of Skip Viragh.

“My team and I were absolutely delighted that we had been selected to receive a RAN Grant,” said Dr. Goggins. “I am so grateful for this support and recognition, and I feel a deep responsibility to the pancreatic cancer community to be successful in coming up with an effective early-detection strategy.”

Dr. Goggins’ RAN Grant supports the newest phase of his Cancer of the Pancreas Screening (CAPS) study. Conducted in multiple locations, the CAPS study is designed to screen individuals considered to be at high risk for developing pancreatic cancer. “The RAN Grant enables us to maintain and expand our screening efforts,” said Dr. Goggins. “Early detection of pancreatic cancer is very challenging, and there is a lot of work to do. But we are encouraged by some of the early data from our approach.”

Dr. Goggins (front row, third from the left) and his colleagues at Johns Hopkins University welcome Baltimore Affiliate volunteers for an institutional site visit and tour of the research labs.

Dr. Goggins and his research team are searching for clues in the pancreatic juice (fluid that can be noninvasively extracted from the pancreas) or blood of high-risk individuals that will enable them to identify very early cancerous or, ideally, precancerous lesions. These clues, in the form of acquired mutations detectable in the participants’ samples, are combined with results from imaging of the pancreas (typically via endoscopic ultrasound) to determine whether an individual has abnormalities in his or her pancreas that could suggest pancreatic cancer or its precursors.

The types of questions being addressed by this study include: How early can mutations or other genetic alterations that indicate the presence of disease be found? Which mutations are the most informative? How do we best define whether a person should be considered high-risk and would benefit from screening efforts? Answers to these questions will ideally help researchers devise better ways to detect the disease while it’s still in its early, less aggressive stages.

In addition to his extensive work in the lab and the clinic, Dr. Goggins has been an active volunteer with the Baltimore Affiliate of the Pancreatic Cancer Action Network. He has co-hosted several site visits at Johns Hopkins, where local volunteers toured the labs and learned more about the research being conducted. 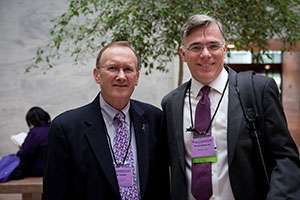 He also attended Advocacy Day in 2013. “It was the year the Recalcitrant Cancer Research Act was signed into law,” recalls Dr. Goggins. “Even though the gears of our government tend to turn slowly, I was buoyed by the success of this advocacy effort. It was a great experience to participate in, and I highly recommend that people take the opportunity to go to Capitol Hill.”

“I feel such a deep connection to this organization,” continued Dr. Goggins. “Participating in local affiliate events and advocacy efforts is a way for me to express my gratitude for the support the organization has given to me and my research endeavors. I’m not sure I’d be where I am today without Pamela and the Pancreatic Cancer Action Network.”

Learn more about the Grants Program that has funded Dr. Goggins’ important research and the research of well over a hundred other leading scientists.