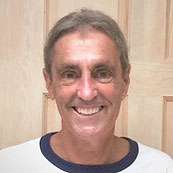 Dennis Levinson, Know Your Tumor participant, took part in one clinical trial and is investigating another.

Anyone who has had to deal with a disease like pancreatic cancer knows it affects your life plans in an instant. Retired high school principal Dennis Levinson had been looking forward to maintaining his active lifestyle, traveling with his wife and spending more time with his grandchildren during his retirement. But once he was diagnosed with stage 4 pancreatic cancer last June, his plans went on hold.

Like many others who have heard the same news, Levinson was shocked by his diagnosis. “Before I was diagnosed,” Levinson said, “I had none of the risk factors associated with the disease. I didn’t smoke. I worked out regularly and was an avid runner and marathon swimmer.”

But last May, Levinson began suffering from fatigue and experiencing pain in his stomach, so he consulted a local physician in his small town. The initial CT scans showed no cause for his abdominal pain. When symptoms persisted, Levinson sought treatment at a larger urban hospital where his CT scans were reviewed by a new team and revealed tumors in his pancreas, liver and lungs – stage 4 pancreatic cancer.

His wife, Debra Levinson, refused to sit back and be a bystander. She immediately became his advocate and started searching the internet for information and resources. That’s how she found the Pancreatic Cancer Action Network. After speaking with a PanCAN Patient Services Case Manager, she learned about the new Know Your Tumor personalized medicine service. Personalized medicine is an emerging option of which the couple was unaware. Levinson explained, “When I suggested to my doctor that I wanted to participate in the new service, he was open to seeing how a molecular profile of my tumor could help with making treatment choices.”

In October, Levinson decided to enroll in Know Your Tumor and had a biopsy done. He received a detailed report analyzed by a team of experts, which he discussed with his oncologist. Fortunately, they discovered that he was eligible for a clinical trial, and he enrolled to start treatment in December.

Right before his treatment began, Debra Levinson describes him as hitting a low point. He could barely muster the energy to get out of bed for meals. “Deb, it’s not looking good,” she recalls friends and family saying as they prepared to say goodbye around the holidays.

Then, a dramatic change – Levinson’s health started to improve after he began treatment in the trial. By Christmas, he started to look better, and he could walk with more ease again. By January his hair had started to grow back, and in the coming months he regained enough strength to return to the gym and, most importantly, enjoy more of his family. “I get to play with my twin granddaughters every day,” Levinson said with joy in his voice.

Over the course of his treatment, Levinson experienced a significant reduction in the size of his tumors. However, he recently learned that while his original cancer still seems to be responding to treatment, new tumors have appeared. He is now working with his PanCAN Patient Services Case Manager to learn if he qualifies for another clinical trial.

Levinson’s spirits and his wife’s remain lifted. Debra Levinson offers this advice for anyone struggling through pancreatic cancer: “The more information you have about your disease, the better chance you have of fighting it.”

Levinson agrees. “There are options to treat this disease. Find out if you or your loved one is eligible for Know Your Tumor or a clinical trial; it could really make a difference.”