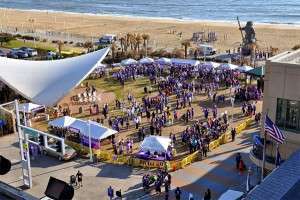 An early-morning crowd gathers for PurpleStride Tidewater in Virginia Beach, Va., on April 5, 2014.

Amy Tang, PhD, was beaming as she made her way along the oceanfront boardwalk — the 5K walk/run route for PurpleStride Tidewater — in Virginia Beach, Va., on April 5.

She was surrounded by more than 800 people who had also come out to support the inaugural event, and among them were her Eastern Virginia Medical School (EVMS) colleagues from several departments (Surgery, Microbiology and Molecular Cell Biology, Leroy T. Canoles Jr. Cancer Center, Psychiatry and the President’s Office), as well as her surgeon/oncologist/pathologist colleagues from Sentara Cancer Network (the largest healthcare provider in Virginia) and Virginia Oncology Associates (VOA). 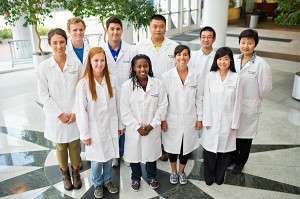 Dr. Amy Tang (second row, far right) and others from the Department of Microbiology and Molecular Cell Biology at Eastern Virginia Medical School, who formed a team for PurpleStride Tidewater.

Together, they made up the “EVMS – Sentara – VOA Pancreatic Cancer Team” that Dr. Tang had formed. In addition, she had also recruited friends, neighbors and others to join a separate team she created called “Purple Power – Create Hope.”

A growing number of institutions across the country are leaving their mark on PurpleStride events. Whether it’s by sponsoring the event or forming a team and participating, as Dr. Tang and her colleagues did, it’s becoming more common for the science and healthcare community to trade in lab coats for running shoes on PurpleStride day in an enthusiastic show of local support.

As a pancreatic cancer research scientist and a proud recipient of a Pancreatic Cancer Action Network – AACR Innovative Grant in 2010, Dr. Tang said she has always wanted to find a smart way to control and eventually eradicate pancreatic cancer. She knows the statistics all too well. The American Cancer Society reports that this year in Virginia, there will be an estimated 1,060 cases of pancreatic cancer and 1,010 deaths from the disease. 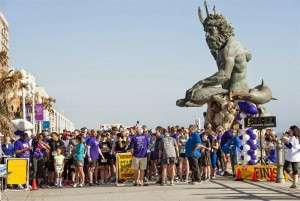 Runners and walkers get ready to start out on the oceanfront course at PurpleStride Tidewater.

Dr. Tang said her colleagues were eager to join her because they, too, are committed to making a difference in the fight against pancreatic cancer.

“We wanted to participate in PurpleStride Tidewater because it’s important that we support our pancreatic cancer patients and their families and friends,” Dr. Tang said. “A lot of patients are suffering because of a grim prognosis that has not changed in more than 40 years, and that’s not OK.

“As researchers, our goal is to think outside the box and conduct innovative, high-quality and
state-of-the-art research projects that can save lives. It’s especially important to me that we raise more awareness about this disease in the Hampton Roads Cosmopolitan Six-City Area. This is how we can help make sure the Pancreatic Cancer Action Network reaches its goal of doubling survival by 2020.” 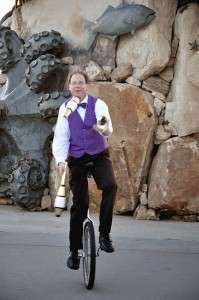 Harold Wood, a two-year pancreatic cancer survivor, entertains the crowd with his juggling skills — while riding a unicycle!

Outside the lab, Dr. Tang has been involved locally in the cause for years. She has supported the Pancreatic Cancer Action Network’s Tidewater Affiliate volunteers, assisting them with education and outreach efforts and events. And in the months and weeks leading up to PurpleStride, Dr. Tang and her daughter, Angela, as well as many of her graduate students at EVMS, printed and distributed PurpleStride fliers throughout neighborhoods and at businesses in Virginia Beach and Norfolk.

She said that the sea of purple on the big day exceeded her expectations, and that she got extremely positive feedback from her peers at EVMS, Sentara, VOA and other local businesses.

“My colleagues were so appreciative that I asked them to join my team,” she said. “They’re ready to do it again next year! I would encourage local medical institutions to do the same thing EVMS did — form a team for your local PurpleStride and make a difference. It will mean the world for your patients to see you fighting pancreatic cancer in this way.”

Dr. Tang added that she was honored to work alongside many dedicated volunteer leaders within the Tidewater Affiliate, including Affiliate Coordinator Ellen Zeltmann and Event Coordinator Barb Geraghty.

“We are fortunate to have so many passionate Pancreatic Cancer Action Network volunteers who work tirelessly to put on events like PurpleStride Tidewater. My students and I are grateful to be given an opportunity to contribute to such a great cause, and we consider ourselves lucky to serve as proud members of our local affiliate.”

Stay tuned for more stories about institutions joining the fight locally. In the meantime, know of or work for an institution that might be interested in supporting a local PurpleStride? Contact us at corporaterelations@pancan.org or call 1-877-272-6226.