This year, the Pancreatic Cancer Action Network is proud to award 12 research grants, totaling a record $5.19 million, to 22 scientists throughout the country and, for the first time, to a scientist based overseas. Ten of the grants are being administered in partnership with the American Association for Cancer Research (AACR). The remaining two grants are KRAS Fellowships awarded earlier this year in partnership with the National Cancer Institute (NCI) Frederick National Laboratory for Cancer Research, in alignment with the NCI’s RAS Initiative (an important program for accelerating progress in pancreatic cancer research). The new grant recipients were recognized at the recent AACR Annual Meeting, which is the highest profile event for cancer research in the United States. 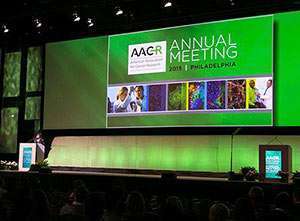 The opening session at the AACR Annual Meeting. Photo by © AACR/Todd Buchanan 2015.

Taking place from April 18-22 in Philadelphia and attracting more than 19,000 scientists, physicians and industry professionals from around the world, the 2015 AACR Annual Meeting served as an extraordinary opportunity for the pancreatic cancer research community to share the latest scientific achievements and cultivate new collaborations to spur continued progress across the field. New and previous Pancreatic Cancer Action Network grantees presented and attended sessions on the latest research findings, and other leading scientists associated with our organization were spotlighted throughout the meeting.

Five Types of Grants in Four Research Areas Are Funded

The Research Acceleration Network Grants provide $1 million to teams of scientists and clinicians pursuing a clinical project with strong potential to double pancreatic cancer survival by 2020. The $300,000 Translational Research Grants support projects with established scientific findings that require additional experiments before being tested in patients.

The $600,000 Pathway to Leadership and $45,000 Fellowship grants are awarded to postdoctoral fellows. This year’s Fellowship grantees have the added benefit of collaborating closely with the Frederick team. The $200,000 Career Development Awards go to independent researchers early in their careers. These three grant mechanisms focus on attracting and retaining investigators in the field of pancreatic cancer research.

Molecular analyses improve our understanding of the changes that cause normal cells to become cancerous and identify vulnerabilities within cancer cells that can be exploited to slow or stop disease progression. Grants in this category include efforts to target KRAS, the most frequently mutated protein in pancreatic cancer.

Personalized medicine involves efforts to tailor treatment decisions based on the specific molecular changes within a patient’s tumor. Immunotherapies seek to harness patients’ immune systems to fight off their pancreatic tumors.

All of these research efforts will be key to increasing knowledge about the disease and translating laboratory findings into improved patient survival.

“By recruiting the brightest scientists with the most novel ideas, we continue to build a broad research community, poised to make significant scientific and clinical discoveries,” said Julie Fleshman, president and CEO of the Pancreatic Cancer Action Network.

Besides receiving funding for their research projects, grant recipients are welcomed into our Community for Progress, which provides opportunities for professional development, training, networking and collaboration. The AACR Annual Meeting provided an exciting venue for our Community for Progress – including Pancreatic Cancer Action Network staff, our Scientific and Medical Advisory Board (SMAB), past-year grantees and many other leading researchers and clinicians – to come together with our new grantees and discuss recent discoveries and insights in the field.

To support and advance the Community for Progress, the Pancreatic Cancer Action Network organized educational sessions, poster presentations and a networking reception in order to promote knowledge sharing and collaboration. 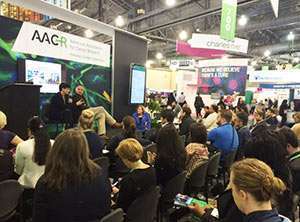 One of the educational sessions offered by our organization, “Career Paths in Pancreatic Cancer Research,” featured 2014 grantees Kenneth Scott, PhD, from Baylor College of Medicine, and SMAB member and two-time grant recipient, Diane Simeone, MD, from the University of Michigan. Geared toward recruiting researchers to the pancreatic cancer field and supporting those currently studying the disease, the forum with well-established physician-scientist Dr. Simeone and successful early-career investigator Dr. Scott highlighted how the current medical research climate offers an opportune time to enter the pancreatic cancer field, given the increasing synergy across the cancer landscape.

Dr. Maitra shared that his 2004 Career Development Award was his first-ever research grant, providing $100,000 in funding. Today, he is the scientific director of the Sheikh Ahmed Bin Zayed Al Nahyan Center for Pancreatic Cancer Research at MD Anderson Cancer Center.

Dr. Maitra’s research team has made several groundbreaking observations in the biology and genetics of pancreatic cancer. His insights on breaking news in the field have a large following on Twitter.

At the “Icon” session, Drs. Maitra and Rhim spoke about the sense of family that the Pancreatic Cancer Action Network provides to its grantees and the importance of finding a community that gives researchers intellectual support. They also addressed the need for “smarter” clinical trials in the pancreatic cancer field.

To stimulate collaborative work between our grantees and fellow researchers in the field, we hosted a poster and discussion session featuring our 2014 research grant recipients. These scientists displayed posters of their findings and delivered presentations on topics such as early detection, immunotherapy and novel treatment strategies that take advantage of the unique ways in which cancer cells break down, or metabolize, nutrients.

Other grantee presentations focused on improving our understanding of the stroma, or dense tissue, that surrounds and infiltrates pancreatic tumors and impacts tumor growth and progression. Nearly 150 attendees engaged the presenters in lively discussion during the session.

The two recipients of this year’s inaugural Pancreatic Cancer Action Network – NCI, Frederick National Laboratory for Cancer Research KRAS Fellowships, John Hunter, PhD, and Lynn McGregor, PhD, were invited to speak at a session entitled “The NCI RAS Initiative at the Frederick National Laboratory for Cancer Research.” The well-attended session was chaired by 2010 grantee and Emeritus SMAB member Frank McCormick, PhD, FRS, who is leading the RAS Initiative, and the NCI’s acting director, Douglas Lowy, MD, was in attendance.

The high-profile work that Drs. Hunter and McGregor and the Frederick team of researchers are doing is key to progress in pancreatic cancer. A member of the RAS family, KRAS is mutated in more than 90 percent of pancreatic tumors. Previously deemed “undruggable,” RAS is now the target of a renewed effort to determine whether its activity can be therapeutically blocked to kill cancer cells. 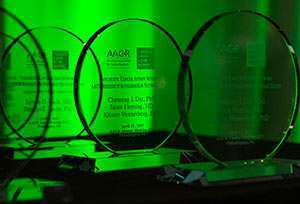 The plaques awarded to recipients of our prestigious Research Acceleration Network Grants. Photo by © AACR/Todd Buchanan 2015.

On the final evening of the conference, Lynn Matrisian, PhD, MBA, vice president of Scientific & Medical Affairs for the Pancreatic Cancer Action Network, and Carlos Arteaga, MD, AACR president, presented 2015 grantees with awards during a dinner and reception.

“The awards dinner provided a wonderful opportunity to celebrate our new 2015 research grant recipients,” said Dr. Matrisian. “Our focus on inspiring research in innovative scientific areas will accelerate progress in understanding and treating pancreatic cancer to save more lives. And our grants directed toward early-career scientists will ensure that young investigators stay in the field to carry out their vital research investigations.”

Growing Awareness of Pancreatic Cancer as a Research Priority

The 2015 AACR Annual Meeting was the best-attended meeting in AACR’s long history. Importantly, more sessions and presentations than ever before focused on the often overlooked pancreatic cancer, and the meeting demonstrated a growing awareness of the urgent need to find effective early detection methods and treatments.

As federal funding for cancer research continues to be threatened, private funders play an increasingly pivotal role in sustaining momentum in the field. We are proud to work alongside other funders like the AACR to support researchers who are leading the way to increase pancreatic cancer survival.

Learn more about the 2015 research grant recipients and their groundbreaking projects.