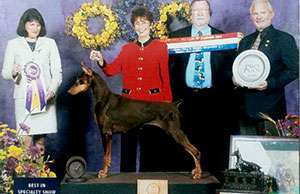 Jeanenne Thompson with Lexi, winner of the Doberman National Dog Show 2004. Thompson passed away of pancreatic cancer in 2005; her daughter has hosted Walk with the Dogs 5K in her memory for the past 10 years.

It was October 2004. Jeanenne Thompson and Lexi, a Doberman Pinscher show dog, entered the arena among a procession of best-in-class Dobermans at the Doberman Pinscher National Dog Show in Cincinnati. More than 700 dogs were in the competition that year, but by the end of the day, Thompson was the handler with the biggest cause for celebration: Lexi had come out of retirement to compete in the Veterans class and had just won the top prize among all the classes – a feat that is virtually unheard of, said her daughter, Christi Thompson Merritt.

Today, when Merritt reflects back, she remembers that day as being one of the best in her mother’s life. But it was a bittersweet time, because no one in the family knew exactly how many days Thompson had left.

Just four months prior, a doctor had walked into an exam room where Thompson waited anxiously and said, “I’m sorry to tell you this, Jeanenne, but you have pancreatic cancer, you have three to six months to live, and you should go home and get your affairs in order.”

Instead, Thompson put up a valiant fight.

She spent as much time as she could with her three daughters, reconnected with old friends, traveled and showed Lexi that one final, memorable time.

She lost her battle after eight months. But today, her giving, selfless spirit and her impassioned love of dogs live on through the efforts of Merritt and thanks to the unabashed support of a small-population town and big-hearted friends who, on the first Saturday of June each year for 10 years, have hosted a dog walk in her memory.

The “Walk with the Dogs 5K” is a Community Ambassador event for the Pancreatic Cancer Action Network, with all proceeds benefiting us. The Community Ambassador program is for anyone who’d like to host their own event, set up a mutually beneficial cause-marketing campaign or participate in an athletic event as a way to raise funds and awareness for the organization. Community Ambassadors can also raise money by creating an online tribute page to honor a loved one’s memory, or by giving or accepting donations to the Pancreatic Cancer Action Network instead of giving or receiving gifts for a special occasion. 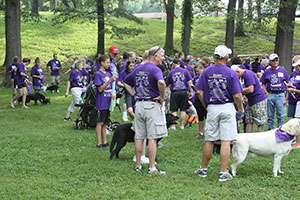 Walk with the Dogs 5K is a volunteer-hosted fundraiser and awareness event in Nashville, Ill. The tenth annual event will take place June 6, 2015.

Walk with the Dogs is always held in Merritt’s tiny hometown – population 3,200 – of Nashville, Ill., where her parents lived their whole lives. Hundreds (of humans) participate each year, many with four-legged friends in tow.

“When mom passed away, I didn’t want to mourn,” said Merritt, who volunteers her time putting on the event with the help of her aunt and uncle, Carolyn and Charlie Deterring. “I wanted to do something to celebrate her life and also raise awareness and funding for pancreatic cancer. The first thing we did was start a foundation, the Jeanenne Thompson Foundation, and after an internet search, I called the Pancreatic Cancer Action Network and said, ‘I want to do something to give back!’”

And she did, right away, with the first Walk with the Dogs in 2006.

Merritt said the idea to host a walk with dogs simply made sense. Her parents had shown dogs since the 1970s, and she and her sisters had always had dogs as pets.

Merritt said she, as the event organizer, is still going strong after 10 years for two big reasons.

“Number one, I do this because of the love I had for my mother, but I also do it because something has simply got to change with this disease. Every year, I see more and more people at the walk who are there because they know someone with pancreatic cancer or they’ve lost someone, and it just frustrates me that people are still having to go through what we did.”

She said that during the 10 years she has been involved as a volunteer with the Pancreatic Cancer Action Network, it’s been gratifying to see more people join the movement.

“When I think about the organization’s diligence in its efforts to keep fighting for more research funding so that we can change the course of this disease, I feel better. And the growth of events nationwide is helping to raise awareness so much.”

Christi Thompson Merritt (right) with her uncle Charlie and aunt Carolyn Deterring, at Walk with the Dogs 5K last year. They host the event in memory of Merritt’s mother and Carolyn’s sister, Jeanenne Thompson, who loved dogs.

“Our participants normally span about 20 states – Mom had friends all over the country from showing dogs her whole life,” Merritt said.

Those who do make it to walk in person say they appreciate the sense of community at the event, and that small touches go a long way toward creating a meaningful occasion. Each participant gets a bag of various goodies, and doggie bags include a purple bandana.

“People tell us that the time they spend at our walk is one of their most inspiring experiences all year,” Merritt said.

She also supports her local volunteer-led affiliate in Nashville, Tenn. In fact, the Jeanenne Thompson Foundation is the Gold Sponsor for the affiliate. And she participates in PurpleStride Nashville, one of the Pancreatic Cancer Action Network’s signature walk/run awareness events held around the country.

She notes that Walk with the Dogs is different from PurpleStride in that it’s “all about the dogs,” and PurpleStride events do not allow pets for liability reasons.

Merritt encourages others to make an impact in the fight against pancreatic cancer by volunteering in a way that works best for them.

“I think it says a lot about a person when they give back,” she said. “My family didn’t have a lot, but my parents worked hard for everything we did have. As a result, I have a lot of heart and a lot of soul to give, and I’d like others to remember that sometimes, that is more than enough! There’s a big wheel that has to keep turning, and I’m just one spoke in it.”

Merritt said she is looking forward to this year’s walk because she will get to reunite with friends and family, meet new two- and four-legged friends – all clad in purple – and make an impact in the fight.

And she’ll do it with her own dogs, Scout and Hank – both Pugs – by her side, proudly sporting their purple bandanas.

“One way or another, I will continue to Wage Hope every single day of my life,” she said.

For more information about Walk with the Dogs, visit www.jthompsonwalkwiththedogs.com. If you’d like to Wage Hope by raising funds to support the mission of the Pancreatic Cancer Action Network through our Community Ambassador program, visit www.pancan.org/communityambassador or call 877-272-6226.