Your tax-deductible gift could be matched this holiday season! Learn more. 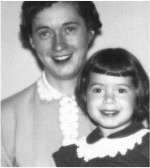 Pamela Acosta Marquardt at age 3 with her mother, Rose Schneider

My family’s world was shattered the day my mother, Rose, was diagnosed with pancreatic cancer. In June of 1996, she was given three to six months to live and told to go home and get her affairs in order. I will never forget how helpless I felt when I went online to find an organization that dealt with pancreatic cancer…and realized one didn’t exist. How could there be a disease with no hope and with no one taking action?

My mother settled her affairs and died six months later, leaving us in shock and overcome with grief. I was heartbroken but determined to not let her death be in vain. She had grown up the youngest of six children raised by a single mother, living on the wrong side of the tracks and wearing hand-me-downs and shoes with holes in the soles. My mother never felt like her life mattered much.

I knew I had to do something to make sure that her life mattered.

Since 2003, we have awarded 110 research grants, totaling nearly $23 million, to scientists at leading institutions nationwide.

Funding for pancreatic cancer from the National Cancer Institute (NCI) has increased from $17 million in 1999 to nearly $105 million in 2012.

PanCAN Patient Services has served 90,000 patients and families since the program began in 2002.

Since 1999, more than 1 million people have been inspired to take action against pancreatic cancer.

After connecting with others online who had experienced the heartbreak of pancreatic cancer, it became clear that there was a huge opportunity to do more. In February 1999, I founded the Pancreatic Cancer Action Network with the goal of it becoming a beacon of hope for those touched by pancreatic cancer – a place where people could use their anger and grief to make a difference. A place to join hands, raise our voices and put our boundless passion to work to change the course of this disease.

Today, it’s hard to imagine where this organization would be without YOU.

Together, we have spent the past 15 years making real progress. And I firmly believe that, with your continued support, we’ll overcome all obstacles on the path to success. Together, we are relentless.

We made the bold commitment to double survival by 2020. The best and brightest scientists are already making great strides in rewriting the future of pancreatic cancer. But we need your continued support to Wage Hope for a brighter tomorrow.

With your donation, we can make sure that my mother’s life, and the lives of many others like her, continue to matter.

Thank you from the bottom of my heart for your passion, your generosity and your continued commitment to the fight.

P.S. To see the progress you’ve made possible in the last year, view our annual report at pancan.org/impact_2014.