A Message from the President and CEO:

Our guest columnist this month is Kara Friedrich, Denver Affiliate Coordinator and true believer in Advocacy Day and the National Call-In. Also a member of the Volunteer Advisory Council, she has been a tireless volunteer since 2007. Kara has lost three family members to pancreatic cancer and is passionately committed to changing the course of this deadly disease.

Having participated in four previous Advocacy Days, Kara knows firsthand the mighty impact our presence and our voices make on Capitol Hill and the importance of raising our volume through the National Call-In. Kara will be on Capitol Hill again this year — in honor of her father, her aunt, her great-aunt and for her children, her grandchildren and all those threatened by the specter of pancreatic cancer. 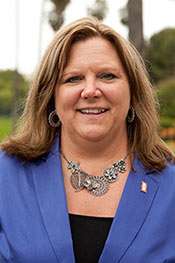 I’m going to be on Capitol Hill for Advocacy Day this June — just as I have been four times before in the last five years — to give voice to this year’s rallying cry: Stomp on Pancreatic Cancer!

I go to Advocacy Day because I want Congress to hear my story. I want Congress to understand that pancreatic cancer is a stealthy, too-often surefire killer that robs families of those they love and casts a pall over the futures of those still living. I want them to know that we need equally deadly ammunition to fight this killer, and that the best ammunition is stepped-up federal funding to make sure researchers can find better ways to detect and treat the disease.

I’m relentless in my devotion to this cause because I’ve lost three family members to pancreatic cancer already, and I don’t want to lose any more. And I don’t want to lose my life; I’ve got one loving husband, three great children and two amazing grandchildren, and I want to share the future with the lights of my life. It goes without saying that early detection is really important to me and mine.

My first real brush with pancreatic cancer came in 1995. My father’s sister died of the disease, which at that time was considered absolutely unsurvivable. I was close to my aunt, and I was jarred by the ferociousness of the disease and how quickly it took her. And although I didn’t know it at the time of my aunt’s death, I learned later that my father’s aunt had also died of pancreatic cancer in the 1970s.

Then, in 2000, I got the news that really rocked my world — my father, my hero, was diagnosed with the same ruthless killer that had taken his sister and his aunt.

Dwain Saldeen, my dad, was larger than life. We were truly two peas in a pod, and growing up, I idolized him. Hardly ever sick before, my dad knew what he was up against when he got his diagnosis, informed by the loss of his sister. He sobbed with helplessness, and so did I.

But then, a few months later — he found the will to fight. His surgeon told him about the Pancreatic Cancer Action Network and connected him with a local affiliate. He rallied and found hope, and for the next two and a half years, until he left us in July 2003, he did everything he could to fight the disease and inspire hope in others that we would someday have a cure. Among many other things, he did a television interview to promote the cause. In 2002, he and my mom, Alice, and I attended the Pancreatic Cancer Action Network’s Evening with the Stars gala — and that was the last time I danced with my father. It’s one of my favorite memories. 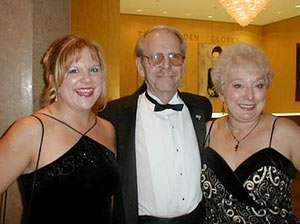 Kara Friedrich with her father and mother, Dwain and
Alice Saldeen, at the Pancreatic Cancer Action Network’s Evening with the Stars gala in 2002.

Two weeks before he died, my dad made me promise that I would take up the fight. He was afraid that pancreatic cancer would swoop down on our family again, and he wanted to know that one of us would continue to be a voice for progress against the disease through the Pancreatic Cancer Action Network.

For four years, I was too angry with pancreatic cancer to have anything to do with it. But in 2007, I felt my dad’s spirit tap me on the shoulder, and I got involved with the Denver affiliate, actively volunteering, then serving as event coordinator, then becoming affiliate coordinator, my current role.

I went to my first Advocacy Day in 2009. It was one of my life’s peak experiences, truly empowering. Finally I had a voice — a loud one — to speak out on behalf of my father, the rest of my family, myself, and all those currently afflicted with pancreatic cancer and those who will be diagnosed in the future. I met many survivors there, put more faces to the disease, took my commitment to a new level entirely.

This year, I’m going again for my father and my family, and for someone else, too — a fantastic volunteer with my Denver affiliate, a woman in her early 40s who just died of pancreatic cancer, the first volunteer survivor in my group to leave us. She was going to speak at the Denver PurpleStride event, but now her message will be delivered by her wife. Just days before her death, she was working feverishly on her message to the PurpleStride crowd, and she asked her wife to be her voice in the event of her death. So this year’s event takes on even greater significance for me, and you’d better believe I’ll be fervent in my advocacy.

While not everyone will be able to make the journey to Washington, D.C., to attend Advocacy Day, there is something that everyone can do to support me and everyone else who is on Capitol Hill on June 17: participate in the National Call-In. It’s easy. You just call your elected officials’ offices and tell them that they need to Stomp on Pancreatic Cancer! The calls make a huge impact. During Advocacy Day last year, I walked into a congressional office and introduced myself, and the receptionist knew immediately why I was there. “Oh,” she said, “you must be part of that group in Colorado; our phone’s been ringing off the hook with their calls.” Believe me, when you enter the office of a member of Congress, it’s great to know that you’ve got the support of the home team, and to know that their voices are raising the volume of your own.

So, on behalf of my actual family and my volunteer family in Denver, thank you from the bottom of my heart to everyone who’ll be joining me at Advocacy Day 2014, and to everyone who’ll be making those congressional phones ring off the hook during the National Call-In on June 17. At home or on the Hill, let’s all make our voices heard; let’s do our part to Stomp on Pancreatic Cancer this June!