Everyone receiving this message has in some way been touched, directly or indirectly, by pancreatic cancer. We are all too familiar with the statistics and dismal outcomes of the disease. The Pancreatic Cancer Action Network is dedicated to achieving our goal of doubling the survival rate of pancreatic cancer by 2020. Part of our strategy includes passing the Pancreatic Cancer Research & Education Act, federal legislation that would help the biomedical community defeat this disease. 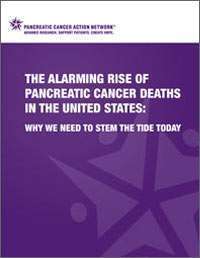 The report “The Alarming Rise of Pancreatic Cancer Deaths in the United States: Why we need to stem the tide today,” is based on published data from reputable biomedical sources. Our approach was to take independent analyses from several different publications, and combine them to get a more complete picture of the projected number of new cases and deaths from pancreatic cancer in the coming years. We found that the number of new cases of pancreatic cancer is expected to more than double between 2010 and 2030. The number of deaths is projected to increase by 2.4-fold by 2030, and may surpass deaths caused by breast and colorectal cancer by as early as 2015. That is just three years from now.

The good news is we are not powerless to change this. There is a great deal of momentum in the pancreatic cancer research community that is taking place in laboratories and clinics throughout the country. We now have a deeper understanding of some of the biological challenges of the disease, and scientists and clinicians are working tirelessly to develop improved diagnostic tools and better treatment options.

Although the results found in this report are indeed alarming, we are hopeful that they will help reinforce our message that pancreatic cancer deserves increased focus and federal attention. Passing legislation like the Pancreatic Cancer Research & Education Act would ensure that the largest funder of cancer research, the National Cancer Institute, develop a comprehensive, long-term plan of action dedicated to combating pancreatic cancer. And I can assure you that our efforts at the Pancreatic Cancer Action Network will remain steadfast as we move towards our goal of doubling the survival rate of pancreatic cancer by 2020. In fact, we recently launched our 2013 research grants program and plan on distributing a record total of $4 million this year, including a new mechanism that will support a team-based scientific approach that could directly impact patient survival in the near future. Click here to learn more about our research grants program.

Thank you for all you do to increase awareness, education, and resources to help know, fight, and end pancreatic cancer. Together we can reverse the frightening trend of rising incidences and deaths caused by this devastating disease.