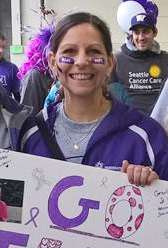 In October 2007, Brenda’s family was shocked to learn that her mom, Dody Norban – an active and healthy 72-year-old wife, mother, mother-in-law and grandmother – was diagnosed with pancreatic cancer. They had no clue how fast the disease would take her. Just four months later, in February 2008, she lost her battle.

Brenda has chosen to fight back by volunteering with the Puget Sound Affiliate of the Pancreatic Cancer Action Network. In doing so, she has found others who share her passion to raise awareness and funding to end pancreatic cancer.

She’s been volunteering since 2009, starting with being on the planning committee of the affiliate’s first awareness walk. The amazing, energetic, determined committee was able to show pancreatic cancer that they were not a group to be reckoned with! They planned the event in just eight weeks, and they were thrilled when 853 people showed up on a rainy November morning in Seattle. Seeing that sea of purple energized them, and this November will be their seventh PurpleStride Puget Sound walk. Brenda has been involved in every PurpleStride and has served in various committee and chair roles.

“What keeps me involved? Every year you hear an even more tragic story than you had previously. While I can’t bring Mom back, and I can’t help every single person diagnosed, I

know that stride by (Purple)Stride, and light by (Purple)Light, there is power in purple and I’m proud to wear it!

“You know the saying, ‘When life hands you lemons…’ My mom’s death was one of the worst things to ever happen to me. But volunteering has connected me with people who understand what that’s like, and they’ve become lifelong friends. With their support, every anniversary of Mom’s death is more bearable. And joining with them to fight pancreatic cancer has given me new purpose. I’m happy to have such a warm, supportive and caring purple family. We were ALL handed lemons, and today we are drinking lemonade together.”