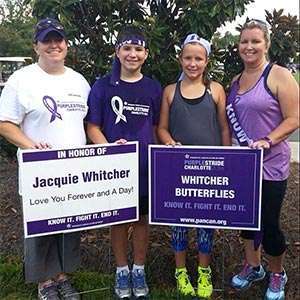 “I became a volunteer for the Charlotte Affiliate as a way to turn my anger and frustration into action,” Pope said. “The fear of not knowing when pancreatic cancer will affect our family again can be overwhelming. Volunteering for the Pancreatic Cancer Action Network is a wonderful way to help change the course of this disease.”

Pope has enjoyed the friendships she’s made along the way, but she said that witnessing progress is what has made her experience the most memorable.

“As a Donor and Corporate Ambassador, you hear ‘no’ a lot, but over time you start to hear ‘yes,’ ” she said. “That one ‘yes’ means you are making a difference!” 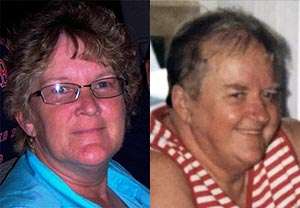 In 2015, the Charlotte Affiliate was fortunate to secure its first PurpleStride Presenting Sponsor. On event day, the sponsor said they were “90 percent sure” they would be back next year.

“Little did I know, as we finished cleaning up post-event, there would be an email waiting for me as soon as I returned to my car. It said, ‘We are 100 percent in for next year!’ It was the most amazing feeling to know that the Charlotte Affiliate and amazing PurpleStride volunteers made such a memorable impression on our sponsor that they would be willing to recommit on event day,”

Wage Hope by getting your company involved in fundraising for your local PurpleStride today!