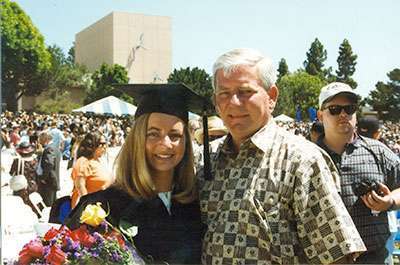 A chance phone conversation and a willingness to make a difference took one volunteer to the top.

When Julie Fleshman’s dad passed away of pancreatic cancer in 1999, she wanted answers.

“I wanted to know why more wasn’t being done -- why my dad, and thousands of other patients -- were sent home to die.”

So she called Johns Hopkins University because it was one of the few institutions with a pancreatic cancer research program at the time. Dr. Charlie Yeo, a pancreatic cancer surgeon (now at Thomas Jefferson University in Philadelphia), called her back and told her about a newly formed organization, the Pancreatic Cancer Action Network. He encouraged Julie to call one of the organization’s founders, Pamela Acosta Marquardt.

“When Pam and I spoke, she told me about a gala that was being planned called “An Evening with the Stars” that would raise money for research. I volunteered by asking my dad’s company to sponsor a table,” said Julie. She brought her mother, sister and best friend to the event.

The gala inspired Julie to do more.

After the fundraising event, she volunteered by hosting a Pancreatic Cancer Action Network table at an American Association for Cancer Research (AACR) conference. Julie was responsible for speaking with conference attendees who stopped by the table. Shortly into the day, she noticed there was no brochure highlighting the organization -- only a few one-pagers with various information about the disease.

So Julie suggested the creation of an organizational brochure. The founders loved the idea, but asked her to take the lead on creating the collateral.

”I took great pride in creating something the organization didn’t have the resources to create,” said Julie. 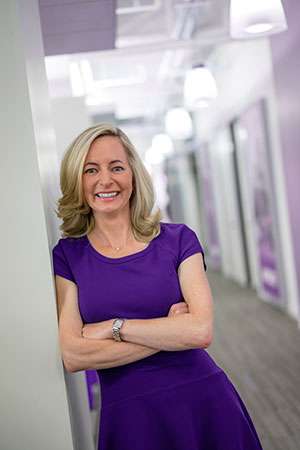 Within a few months of her first volunteer experience and many conversations later, Julie was asked to join the organization as its first full-time paid staff member. From there, she became the executive director, and later, president and CEO.

Julie said that having both perspectives – both as a volunteer and employee – has given her different insight into the work that goes into bringing the organization’s mission to life.

“I have a sincere appreciation for the incredible effort that is involved with volunteering at this organization. I remember the joy I had as a volunteer knowing I was having an impact in memory of my dad.”

Julie is proud that today, the organization offers numerous volunteer opportunities to others who want to make a difference. She makes a strong case for why more people should be involved and has seen first-hand over the last sixteen years the incredible impact that volunteers have had on our cause.

“People should volunteer because they have the opportunity to truly make a difference and change the course of history for this disease. Pancreatic cancer is a tough disease that continues to impact more people. We are only going to change patient outcomes if we continue to raise our voices louder and demand change.”