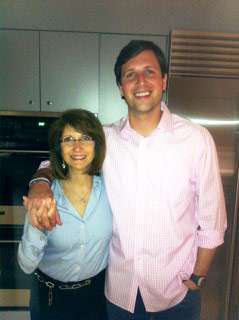 Zach’s mom lost her courageous battle with pancreatic cancer in September of 2014. Living in Dallas, they knew that PurpleStride DFW was in early November, less than two months away. So they rallied their friends and family to join Team Michele, and they raised over $15,000 that first year with over 70 team members. They were one of the event’s top five fundraising teams.

“It was at my first PurpleStride that I remember walking around and seeing all the families, and participants young and old, and the smiles on everyone’s faces. I knew that behind the smiles were probably painful memories, loss and grief, but it struck me that people were enjoying themselves, which was so uplifting for me. I remember stopping during the walk and thinking, ‘We aren’t the only ones. I’m not alone.’”

During Zach’s mom’s fight, they had used the Pancreatic Cancer Action Network’s PanCAN Patient Services service, Clinical Trial Finder, Survivor and Caregiver Support Network and more. This is what led Zach to want to participate in his first PurpleStride, so that he could help raise awareness and funds for the services his family had used and benefited from. Being at PurpleStride revealed another benefit though – they got to see an entirely different side of the organization and the cause.

“That feeling of support, of family, of shared experiences and a common bond is what made me know I wanted to help the organization in any way possible,” he said. “The Pancreatic Cancer Action Network was one of the few bright spots during our fight, and I wanted to make sure everyone was aware of and able to take advantage of the wonderful resources the organization provides to families in need.”

He said his volunteer experience has been wonderful. “When I first expressed interest in volunteering, I was connected to many of the DFW Affiliate’s current volunteer leaders. They had official Pancreatic Cancer Action Network email addresses, business cards and extreme passion. I thought to myself, ‘Are they really volunteers and not employees?!’

“I was taken aback by how organized and committed these volunteers were. Once I joined the DFW Affiliate as Affiliate Chair, I could see why. We all believe in the cause, we are inspired by the reach of the organization, and we appreciate how dedicated the staff is to supporting us. It has been a real pleasure volunteering. It’s also a lot of work, but that’s a good thing, because it speaks to the impact we are having – locally and nationally – to bring an end to this disease.”

Zach said that volunteering affords you the ability to have a great impact on all those currently fighting pancreatic cancer. “It’s a great way to educate the community about the organization – that’s a given. But also, you get another family. So many of us volunteers have, unfortunately, lost major parts of our family. In some ways, the Pancreatic Cancer Action Network helps fill the void we all feel. The organization is able to leverage the support of its volunteers in ways I’ve never seen – by leveraging every dollar raised, every hour volunteered, and every connection made to help those families who have gone, are going, and will go through a fight with pancreatic cancer. And for me, it’s such a pleasure to be a part of that.”