Research in the News

Update on Jack Andraka: A realistic look at an enthusiastic and passionate research effort 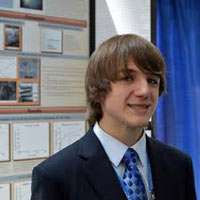 Maryland teenager Jack Andraka won some exciting awards last year, including first prize at the Intel International Science and Engineering Fair, for his work in exploring diagnostic tools for early detection of pancreatic cancer. We are delighted that Jack shows such promise as a scientist, and that he has put his talent and effort to work towards such a worthwhile goal.

Jack’s project involved a dipstick technology, whereby a small piece of paper is coated with antibodies that recognize proteins that circulate in the blood or urine of patients with pancreatic cancer, but not individuals without the disease. This technology is much quicker and less expensive than standard laboratory tests.

The following Q & A will help clarify Jack’s project and what his work means in the fight against pancreatic cancer.

What do we know about the ability of Jack’s test to detect pancreatic cancer?

What needs to be done before this test is available to everyone?

We are excited to see such exuberance and passion from a high school science student interested in experimenting in how to help fight this terrible disease, but want to help ensure that his work is publicized appropriately. We wish Jack and other budding young scientists who are interested in working in the area of pancreatic cancer to pursue it with dedication and determination.