Pancreatic cancer researcher Kirsten Bryant, PhD, works with great resolve every day to fight the disease from a laboratory at Lineberger Comprehensive Cancer Center at The University of North Carolina at Chapel Hill (UNC – Chapel Hill). 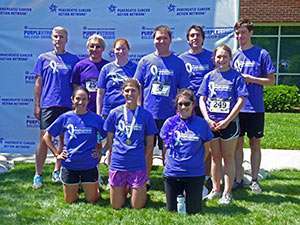 That’s because for her, pancreatic cancer is a personal foe. Her father, Bernie Elzer Jr., fought the disease for 11 months before he passed away in March 2013. At the time, Dr. Bryant was pursuing a career in cancer research by completing her PhD at Cornell University.

“For the first few weeks after his diagnosis, I questioned whether I could do cancer research for the rest of my life,” she said. “But as I watched everything that he went through and realized how few options are available for pancreatic cancer patients, that’s what made me want to focus on pancreatic cancer. It’s a wide-open field with a lot of progress to be made.”

Opportunities to fight the disease also take Dr. Bryant outside the lab, as it happened this past spring, when she organized a team of fellow researchers, friends and family to participate in PurpleStride Raleigh-Durham on May 17 at North Carolina State University’s Centennial Campus.

Dr. Bryant, who served as the captain for Team Der, was herself the top fundraiser on the team, and she was the second-highest individual fundraiser for the event, raising more than $11,600 in memory of her father. 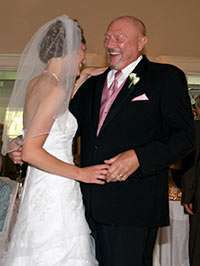 Front and center on her PurpleStride fundraising page was a photo of her dancing with her father on her wedding day. The caption underneath read: “In loving memory of my dad, Bernie Elzer Jr., who left us too soon.”

Dr. Bryant learned about PurpleStride Raleigh-Durham from Dr. Der, professor of pharmacology at the Lineberger Comprehensive Cancer Center and a 2012 Pancreatic Cancer Action Network Innovative Grant recipient (his grant was generously funded by Tempur-Pedic Retailers®). It was Dr. Der’s second year participating in PurpleStride Raleigh-Durham. In 2012, he ran the 5K and remembered how inspirational the day was.

“As I was running in the race, I got words of thanks from other runners,” he said. “They expressed their appreciation for what we researchers are doing. That appreciation was quite touching and only motivated me further to work harder to try to come through for them.”

He said PurpleStride events offer an opportunity for scientists to directly thank participants for their fundraising efforts – efforts that help support the work that he and his students perform every day in his lab. Plus, participants can meet those who are working so hard on treatment and diagnostic tools, in essence lifting the curtain and making it possible for the pancreatic cancer community to become one united force taking strides against the disease.

“They could see first-hand where their hard work and fundraising can make an impact,” he said. “They really enjoyed meeting with the young researchers. In return, our researchers gained a better sense that people are really counting on us to break new ground in understanding pancreatic cancer, and to get one step closer to better treatment options.” 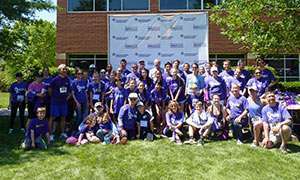 Two teams from The University of North Carolina at Chapel Hill – Team Der Lab and Team UNC – came together to raise funds and awareness for pancreatic cancer at PurpleStride Raleigh-Durham.

Dr. Bryant added that much of a researcher’s work involves negative results and unanswered questions. So as she was encouraging fellow researchers at UNC – Chapel Hill to join Team Der Lab, she reminded them how beneficial it would be for them to see how important their work is to others.

“It’s helpful to step back and look at the big picture and realize why you do what you do,” she said.

For Dr. Bryant, the past year was one of big changes, beginning with the loss of her father, and then the not-so-small feat of moving to a new state and beginning a postdoctoral program. But Bryant views her work in the lab, and her participation in various activities supporting the cause (in addition to PurpleStride, she attended the Pancreatic Cancer Action Network’s Advocacy Day this past June to ask Congress for more federal research funding for pancreatic cancer), as part of the healing process.

“I will always remember the breathtaking ‘sea of purple’ at PurpleStride Raleigh-Durham,” she said. “It was one of several inspiring moments that day as I remembered my dad.

“I know my involvement in this cause is helping me continue my father’s fight, and I can only hope that my work will one day help others who have been affected by the disease as well.”

Stay tuned for more stories about researchers and healthcare professionals getting involved with their local PurpleStride event. And if you know of or work for an institution that might be interested in supporting a local PurpleStride, please reach out to corporaterelations@pancan.org or 1-877-272-6226.

Editor’s note: This is the third article in an occasional series highlighting pancreatic cancer healthcare professionals, researchers and local institutions that enthusiastically support their community’s PurpleStride run/walk events. You can read previous articles in the series in the May and July issues of Pancreas Matters.