Susan Zbacnik of Chicago was losing weight without explanation, and she was always tired. Her instincts told her something was wrong.

And her doctor confirmed it: stage 2B pancreatic cancer.

The diagnosis came in July 2015. The Whipple procedure, a month later. And then seven months of chemotherapy followed.

Zbacnik went back to her job as a clinical social worker part-time about a month after her surgery. “I continued to work through chemo and radiation, and it helped to have something to keep my mind off my situation,” she said.

By last May, less than a year after her diagnosis, Zbacnik had completed treatment and was feeling well when the Pancreatic Cancer Action Network (PanCAN) called. (She had previously contacted PanCAN Patient Services when she was diagnosed and had received helpful information about the disease.) 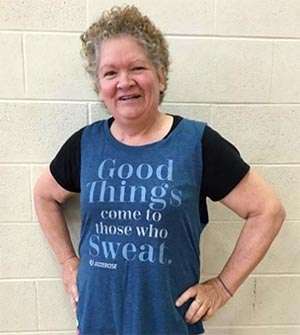 This time, PanCAN had an offer for her.

“They asked me if I was interested in participating in Know Your Tumor® (precision medicine service),” Zbacnik said. “I said sure.”

She completed the Know Your Tumor molecular profile process, and her report showed that she could be a carrier of the BRCA2 gene and recommended that she have genetic testing done.

So she did. “I was concerned about my kids – both their grandfathers had pancreatic cancer, and both grandmothers had breast cancer. I thought, ‘Maybe I can turn my diagnosis into something positive.’

“It felt empowering to be able to do something proactive for myself,” she said.

She discussed the profile results with her PanCAN Patient Services Case Manager and her doctor and decided to pursue a clinical trial that could be effective.

A phase 1 trial was taking place in Detroit and was a genetic-based immunotherapy vaccine. Zbacnik was accepted, and once every four weeks for four months, she traveled there for the vaccine. Every two weeks, she went for a checkup and bloodwork. She has since completed the treatment but continues to go back for routine bloodwork. And though genetic testing eventually revealed negative results, Zbacnik had already started the trial and decided to continue participation to, she said, “help for the future.”

Today she emphasizes the importance of patients surrounding themselves with a support network of healthcare professionals and family throughout their diagnosis and treatment – and afterward.

“I joined a pancreatic cancer support group a couple of weeks before my surgery, and I have continued to attend meetings. From there, I found a healthcare team that would continue to support me for the next four years, and I feel blessed to have them,” she said.

“I’m also blessed with a supportive family. And I’m grateful for the help and information, plus having access to the educational webinars, that PanCAN offers.” 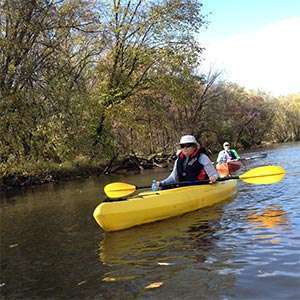 One of the many ways Zbacnik stays active is by kayaking with her husband.

Zbacnik has since participated in her local PurpleStride Chicago, the walk to end pancreatic cancer. She loves to kayak and bicycle. And she managed to return to her daily jazzercise class one week after coming home from the hospital after her Whipple, though she could only march in place to the music at first.

“I believe that my quick recovery had a lot to do with the daily movement and exercise,” she said.

She takes nothing for granted and is thankful for her good fortune.

“I have a very funny saying, and that is, ‘I’m glad I’m not a tuna fish.’ I have a 9 percent chance of surviving five years, but a tuna fish lays between one and five million eggs, and only two or three survive to adulthood.

“I have no idea what my outcome is going to be, but I’ve been very lucky so far.”

Learn more about our Clinical Trial Finder or the Know Your Tumor® precision medicine service. You can also contact a PanCAN Patient Services Case Manager for more information or for help with a search for a trial that may be right for you.