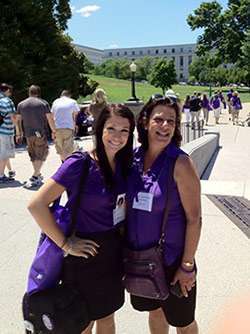 At 23, Stephanie Pieklik is already an eight-year veteran advocate for the Pancreatic Cancer Action Network. In addition to attending National Pancreatic Cancer Advocacy Day for five years, speaking at a PurpleLight tribute and participating in a PurpleStride event – Stephanie also happens to work for one of our most dedicated Corporate Champions, ALEX AND ANI®. Known as “the purple girl” among her friends, Stephanie is definitely all in.

Her passion for the cause is spurred, sadly, by loss. In 2007, her father was diagnosed with pancreatic cancer and passed away less than six months later. She and her mom channeled their grief into action when her mom discovered Advocacy Day online and asked Stephanie if she wanted to go.

Reflecting on the decision to go, Stephanie said, “That moment is when we discovered the Pancreatic Cancer Action Network. At the time, I had no idea how much the organization would change my life for the better.”

Her involvement with the organization touches nearly every part of her life. While in high school, Stephanie organized a Cancer Awareness Week and raised nearly $2,000 for cancer research. The experience of that event also informed her decision about the kind of company she wanted to work with. She choose ALEX AND ANI because of their legacy of corporate social responsibility and community empowerment.

A chance encounter during her workday led to a shared experience with a client who had lost her husband to pancreatic cancer after a very short period of time. Then they realized that they had also attended Advocacy Day. Both of them felt that they truly began to heal by participating in the annual event in Washington, D.C., and they felt deeply grateful for the Pancreatic Cancer Action Network.

When Stephanie showed her client the ALEX AND ANI | CHARITY BY DESIGN® Today is an Opportunity bangle, which benefits the Pancreatic Cancer Action Network, she realized that she already owned it. The bangle was a Christmas gift from her husband, right before he passed away. Stephanie noted, “Our interaction just goes to show that amazing things happen when organizations like the Pancreatic Cancer Action Network and companies like ALEX AND ANI come together to make a difference!”

At her first Advocacy Day, Stephanie met Ralph and Mariann Cheney, tireless advocates and volunteers of the organization for more than a decade. Ralph, a 12-year survivor, and Mariann, asked then 15-year old Stephanie to speak in front of legislators. “I was nervous, honored, scared and excited, all at the same time,” recalled Stephanie. 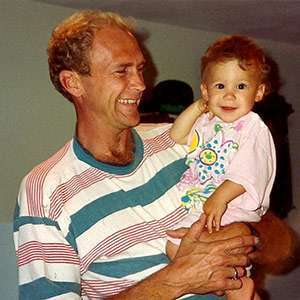 Stephanie Pieklik held in the arms of her father, Frank, who passed away from pancreatic cancer in 2007.

Ralph was the first pancreatic cancer survivor Stephanie had ever met. He described how she sat across a table from him, just staring. Ralph shared, “Advocacy Day was not only the beginning of a deep, meaningful relationship with her new purple family and friends, but the event also set her on a mission to fight pancreatic cancer in memory of her dad and everyone affected by the disease. Stephanie’s dedication, passion, involvement in all aspects of our comprehensive approach, leading fundraisers, wearing purple every day – it’s a testament to her life of caring and giving.” Stephanie came home from Advocacy Day feeling “empowered in a way she had never felt before.”

“Being able to fight this disease in honor of my dad has been the single most fulfilling experience of my life,” said Stephanie. “I truly appreciate the opportunity to share my story with the hope that it might inspire someone else to take positive action in the way that the Pancreatic Cancer Action Network empowered me.”

If you’re ready to get empowered through advocacy like Stephanie, we encourage you to sign up for National Pancreatic Cancer Advocacy Day, June 20-21 in Washington, D.C. It’s a powerful opportunity to Wage Hope in the fight against pancreatic cancer.