As Father’s Day approaches, a mother readies to participate in PurpleStride Connecticut as a way to remember her late husband and instill a sense of strength and determination in their baby son. 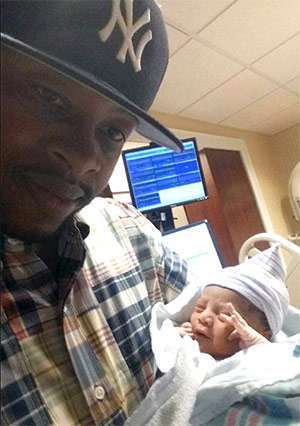 Terry with his newborn son, Lance. Terry got to spend just a few months with his baby before passing away of pancreatic cancer.

Every day is a blessing.

For Billie Vaughn this saying is true, even though her life was turned upside down when her husband, Terry, was diagnosed with stage IV pancreatic cancer in February 2013. At the time of his diagnosis, the cancer had spread to almost half of his liver and his oncologist gave him four months to live. He was 34 years old.

But Terry defied the odds.

“With love and faith, he got healthier by the day,” Billie said.

“I became obsessed with learning more about the disease. I researched treatment options and searched for hospitals that were conducting clinical trials. I refused to believe anything other than that he was going to beat this.”

Through her research and her volunteer work with another organization supporting pancreatic cancer awareness, Billie learned about PurpleStride Connecticut. She knew PurpleStride would be a great way for both of them to stay positive and find hope.

“In 2014, a healthy Terry, myself and about 30 more people formed Team ‘Zeno’ – a nickname I had given my husband when we met 16 years ago,” Billie said. “Both of us volunteered the day before the event and the day of. To be at PurpleStride was one of the most awe-inspiring experiences I’ve ever witnessed. Everyone was there to support each other.” 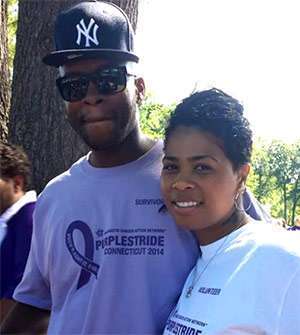 So, when PurpleStride Connecticut 2015 came around, it was so easy for Team Zeno to participate again.

This time the only difference was that they were given a blessing straight out of a fairytale.

The couple was expecting a baby.

“Who would’ve imagined that with Terry’s chemo treatment and my medical issues, that WE would be expecting a child? We had tried having children before with no luck,” Billie said.

“At first we were scared because we thought Terry’s medication may affect the pregnancy. When the doctor said we’d be able to have a successful birth, we were relieved and overjoyed! Never in a million years did I think I would give birth to a son under these circumstances.”

Baby Lance was born on July 18, 2015, three days before Terry’s birthday. He was in love with his newborn son and was happy to hold him and spend time with him. 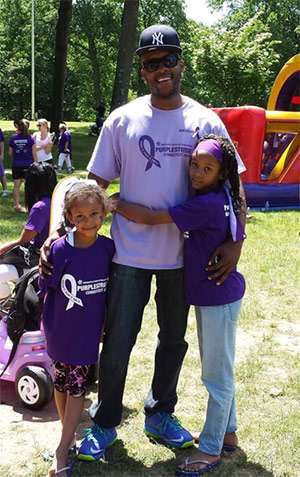 Terry spending time with his daughters at PurpleStride Connecticut 2014.

“At the beginning of each day,” Billie said, “I play back the moment when Terry was holding Lance in the delivery room. It keeps me going. In that moment, I witnessed love.”

In November 2015, the couple learned Terry’s tumor had started to grow again. Even though his cancer had never gone into remission, Billie and Terry were thankful for their baby and that it had been almost three years since Terry’s diagnosis – far longer than doctors expected.

“We were blessed beyond measure. A lot of times, when people think of pancreatic cancer, they automatically assume the END. Well, Terry and I got to live life from the BEGINNING because of this disease,” Billie said.

He was scheduled to undergo a new trial medication at the National Cancer Institute in Maryland, which they hoped would help shrink the tumor. They were looking forward to this opportunity, but right before the trial started, Terry was hospitalized, and on Feb. 17, 2016, he passed away. He was 37 years old.

“I won’t say that he lost his fight. His efforts were nothing short of amazing. He won everything he set out to conquer, and I have to remind myself of this daily,” Billie said. 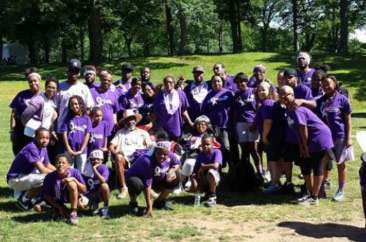 Half of Team Zeno coming together for a photo op at PurpleStride Connecticut 2014.

Billie will continue to support this cause and is expecting around 60 people to join Team Zeno on event day this year at PurpleStride Connecticut, which is taking place this weekend on June 18. That it’s also Father’s Day weekend is not lost on Billie. She said she will continue to Wage Hope, so that her son will know his father’s strength.

“Terry was a strong and beautiful person. Everyone who knew him will instill that in Lance – our little blessing. Terry will live on through Lance and I know he will be everything his Dad was and more.”

Your local PurpleStride is the perfect place to Wage Hope. Sign up today! If you don’t have a PurpleStride coming up in your area, register for our virtual PurpleStride Worldwide on Nov. 19. Also, check out our new Action Center and see what other events are happening near you.