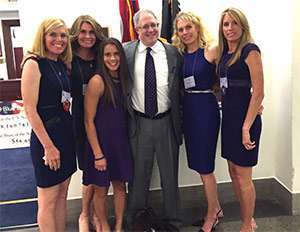 Dianne and her sisters go to Advocacy Day every year. Here they are with Dr. Jordan Berlin, pancreatic cancer researcher and Scientific and Medical Advisory Board member of the Pancreatic Cancer Action Network.

The Haller sisters come from a family of five girls and one boy and were known as the “The 5 Hallerettes” growing up. Mary Kay, Barbara, Dianne, Joan and Katie were close and always supported each other through thick and thin. Nothing could get in the way of that bond.

One of the sisters, Barbara, had a captivating personality and lived her life to the fullest.

“Our sister Barbara, or ‘Hallerette #2’ as she was known, had a magnetic personality and was incredibly charismatic. She was also outgoing and had a zest for life, a strong faith and a fighting spirit,” said her younger sister Dianne Peranich.

When Barbara was diagnosed with stage IV pancreatic cancer in 2008, she was determined to fight it and was willing to endure anything to survive and have more time with her family.

“Her positive outlook and compassion even helped lift the spirits of others battling the disease,” Dianne said. “Barb’s vigor was infectious, and despite the likely outcome of her disease, her oncologists were heartened as she passed the one-year mark. Her oncologist wore the purple tie she gave to him to every appointment he had with her.” 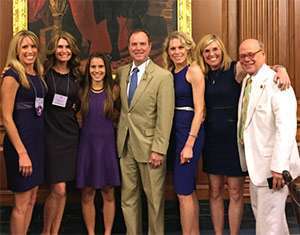 Dianne and her sisters spend time with Rep. Adam Schiff of California during Advocacy Day 2015.

Despite her valiant fight, Barbara passed away on Sept. 9, 2010, one day before her 45th birthday.

Since the sisters had always done everything they could to support each other, it was only natural that they do something to honor their sister after her passing.

They decided to take an annual “girls’ trip” to Washington, D.C., and participate in National Pancreatic Cancer Advocacy Day, the Three-Week Challenge with specific actions each week directed towards raising pancreatic cancer awareness among all members of Congress, and the National Call-in. They did all this on behalf of Barbara and others who have faced pancreatic cancer. This year marks their sixth consecutive trip, and they travel from California to be there.

There are many aspects of Advocacy Day that Dianne and her sisters enjoy. They like being able to interact with policymakers who write laws affecting funding for cancer research, as well as learning more about scientific advancements in the field. 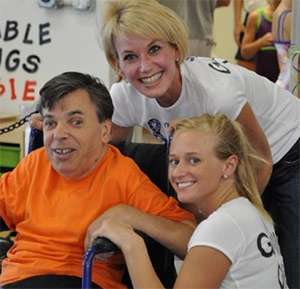 The sisters’ inspiration is their sister Barbara (middle), who passed away from pancreatic cancer in 2010.

“I love connecting with others who’ve been affected by this horrible disease and meeting with members of Congress to urge them to support our cause. I also enjoy listening to the researchers talk about the latest scientific advances they are making to fight this disease,” Dianne said.

Dianne stresses the importance of research funding, as it’s key to getting scientists interested in studying pancreatic cancer and advancing knowledge about the disease. She knows firsthand the power of advocacy and raising awareness.

“Research follows the dollars. As a breast cancer survivor, I’m a beneficiary of years of advocacy, which turned into funds being directed to breast cancer research. They have since been able to find successful therapies to help breast cancer patients. There is so much more hope with that disease. 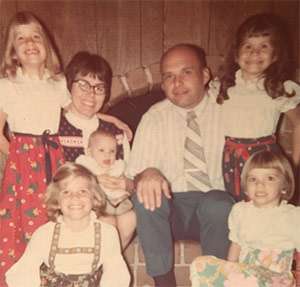 “The 5 Hallerettes” as children smiling for the camera with their parents in 1973.

“I want pancreatic cancer patients to experience that level of hope, as well, and to have a choice in treatment options. I’ll never forget the look of despair in the oncologist’s eyes when he was talking to Barbara about her cancer. It was such a stark contrast to what I experienced three years later when I received my diagnosis,” Dianne said.

Since the sisters have been attending Advocacy Day for many years, they have made many memories and are looking forward to making more for years to come.

“We’ve had so many great memories at Advocacy Day. One time, all of us met with U.S. Rep. Adam Schiff (D-Calif.), my sister’s representative, late one evening. We had a great visit with him and a lot of laughs,” Dianne said. 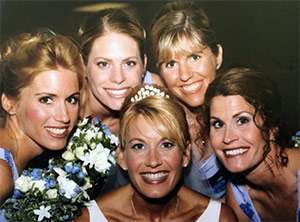 The sisters huddle around Barbara for a wedding photo.

“We also had a chance to talk to Dr. Jordan Berlin last year. He told us about the new pancreatic cancer research being done at Vanderbilt University. In the course of the conversation, it came up that he was a close friend and colleague of one of Barbara’s oncologists at the Mayo Clinic. Small world!”

The sisters live throughout California, and continue to Wage Hope by participating in PurpleStride Sacramento and Silicon Valley as well as other events raising awareness for pancreatic cancer. They also donate to the cause, but Advocacy Day is an event that is special in their hearts because they can all be there together and turn their grief into action.

“As my sisters and I walk through the halls of the Capitol, Senate and House buildings, we truly feel Barb walking with us and we are once again ‘The 5 Hallerettes.’”

Would you like to urge your members of Congress to support increased pancreatic cancer research funding? Get started as an advocate today.