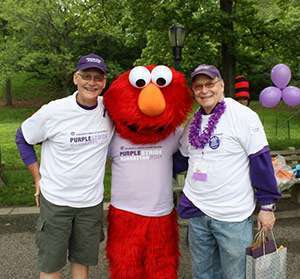 Michael and Ralph quickly realized after meeting that they shared not only the same disease, but the same zest for life and laughter.

Ralph’s tumor was discovered in late 2004. He was diagnosed with stage III ductal adenocarcinoma. He suffered a stroke a week later, which prolonged his recovery. 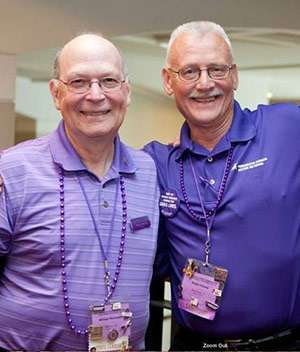 Just two days after Thanksgiving 2005, Michael experienced severe pain, which was diagnosed as diverticulitis. At that time doctors also found a tumor on his pancreas. Later in 2007, after an extensive two-day surgery, he had a bad reaction to a blood transfusion and suffered a heart attack, leaving him in a coma for eight days. His hospital stay lasted 50 days.

More than a decade later, both survivors are using their experience to make a difference in the pancreatic cancer community.

When asked what they admired about each other, their responses were identical: dedication, a fighting spirit and the love they have for others. And those are common qualities very apparent in the fight against pancreatic cancer.

During their years of volunteering with the Pancreatic Cancer Action Network, they’ve developed lasting relationships with fellow survivors, their elected officials (they’ve even received government proclamations naming November as Pancreatic Cancer Awareness Month!) and are avid supporters of the Recalcitrant Cancer Research Act, which was signed into law in 2013.

“Getting the law passed brought a lot of people together,” Ralph said. “We were fighting for something that is truly in our hearts.”

Earlier this year, pancreatic cancer surpassed breast cancer as the third leading cause of cancer-related death in this country with a five-year survival rate of just 8 percent.

“Not a lot of people have the longevity that we’ve been blessed with,” Michael said. “We’ve been through this battle, so we know what others are going through.” 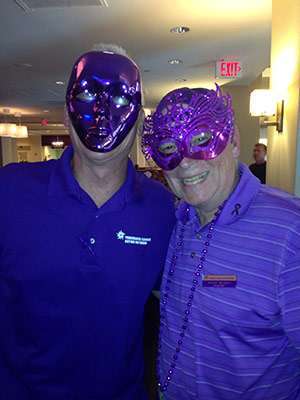 Ralph and Michael credit their longevity in part to lots of belly laughs and a zest for life.

More about Ralph and Michael

Ralph, 68, is an Army veteran who served two tours in Vietnam. He worked as a supervisor at a medical device company until his diagnosis. Subsequent to his pancreatic cancer diagnosis, he was diagnosed with aggressive prostate cancer. He and his wife, Mariann, are 12-year volunteers with the organization and are both Community Advocates for the Hudson Valley area of New York. Ralph has two children and three grandchildren from a previous marriage. The couple lives with their four Labrador retrievers in Monticello, N.Y.

Michael, 67, was a CPA before he went on disability and subsequently retired. He now spends much of his time in his volunteer role with our organization. He and his wife, Nancy, live in Millburn, N.J., and they will celebrate their 36th wedding anniversary in July. They have two daughters and one dog.

Michael volunteers at a local cancer center and synagogue a few days a week. Ralph is a qualified volunteer for peer-to-peer and vet-to-vet support for veterans who suffer from PTSD and aides in suicide prevention.

Both have received extensive recognition and awards for their volunteer efforts.

When you volunteer with the Pancreatic Cancer Action Network, you meet like-minded people and new friends while making a real difference in the fight against pancreatic cancer. Get involved today!