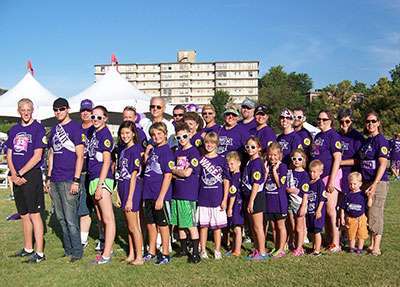 When Leon Schneider’s 13-year-old granddaughter Jaida took to the stage at PurpleStride Oklahoma last August to belt out the National Anthem during opening ceremonies, he was overwhelmed with pride.

And so were more than 25 other family members, who had gathered not only to hear Jaida sing and to honor Schneider, a pancreatic cancer survivor, but to also be part of their much-anticipated family reunion – which they were holding at PurpleStride.

Three generations of family traveled a long way to be there, coming from Virginia, Kansas, Nebraska and other parts of Oklahoma for their biennial get-together. The family wore their purple team T-shirts with the team name, “Survived 11,” on the sleeve to honor Schneider’s 11 years as a pancreatic cancer survivor.

“It felt great to be surrounded by so much family at PurpleStride. Everyone said it was a fun idea to hold our reunion there and that they were glad it happened,” Schneider said.

The Schneider family has gotten together for regular reunions for more than 60 years. Descendants of Schneider’s great-grandfather, who came to the United States from Russia, eagerly attend. So when Schneider and his wife, Colleen, learned that PurpleStride Oklahoma would fall on the same day as the reunion last year, they were initially disappointed. 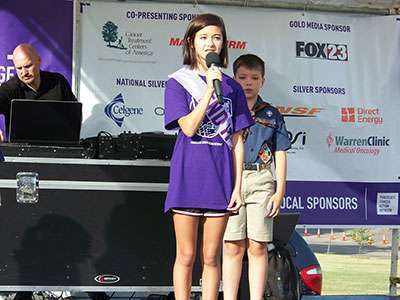 “My wife and I have attended PurpleStride for three years, and we always look forward to it. I felt terrible to have to send a note to my family saying that PurpleStride had been scheduled the same weekend as our reunion and we’d have to miss the reunion. But one of my nieces replied and said, ‘I think we should move the reunion to PurpleStride!’”

Schneider was touched that so many family members would readily agree to meet up at the event. When he took to the stage during opening ceremonies to give the event’s traditional survivor remarks (which the Oklahoma Affiliate of volunteers had requested), he read from a speech he had written called, “I’m a Blessed Man.”

And for good reason. Strong family ties, a great reunion of relatives and a beautiful event aside, Schneider is grateful for his good health. 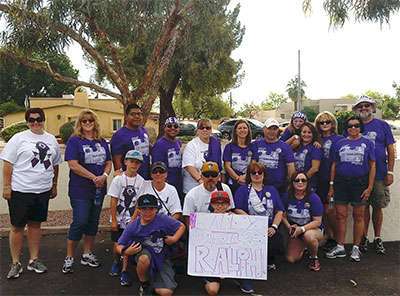 Team Rally for Ralph gathered for PurpleStride Phoenix 2016 – six family members flew in from out of state to surprise their cousins for the event.

Schneider, who is from Owasso, Okla., near Tulsa, said having pancreatic cancer inspired him to spend more time helping others.

“I volunteer at our local hospital in the surgery waiting room and always make it a point to tell families what I’ve been through and that I survived. I can’t help but think it’s encouraging to those families and that I’m giving them hope.”

Across the country at PurpleStride Phoenix last month, three generations of Brenda Haslam’s family had traveled many miles to be there because they, too, were having a family reunion. Haslam said seeing all the survivors at the event was inspiring for her entire family. And just as inspiring, Haslam’s family was able to congregate there to remember their own loved one.

“We had a group of six from Indiana and Illinois and two from Arizona who came to PurpleStride Phoenix on April 9 to surprise our cousins who live there,” Haslam said. “We had signed up as virtual walkers on Team Rally for Ralph, but my cousin Marie and I decided being there in person as a surprise would be more fun!”

Tracey Rindahl of Phoenix is the sister of the late Ralph “David” Short, formerly of Indianapolis, who died of pancreatic cancer five years ago and is the person for whom the team is named. It was Rindahl that Haslam and seven other family members surprised when they went into a local restaurant where she was having dinner the night before PurpleStride. She was speechless as they walked up to her and hugged her. 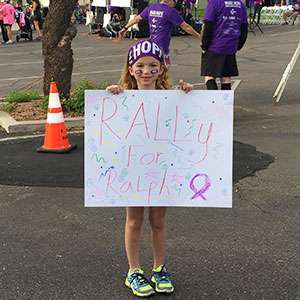 “I was laughing and crying,” Rindahl said. “I still get emotional thinking about it, knowing they had traveled so far to be there.”

Haslam said the reunion at PurpleStride was special, too, because the team’s namesake had always deeply cherished time with his loved ones.

“David would’ve been thrilled to know that our family was there together,” Haslam said. “He was all about family.”

She and a few family members had participated in their own local PurpleStride in Indianapolis previously and will likely do so again. Haslam will be sure to keep an eye out for any surprise visits from relatives, saying, “It would be hilarious if Tracey surprised us by coming to Indianapolis!”

Schneider and Haslam both agreed that PurpleStride-based family reunions should become more common as a unique way for families to connect and honor loved ones.

“I’d encourage others to take this idea and run with it,” Haslam said. “You won’t regret it. It’s so uplifting. We spent a lot of time laughing and talking at the event and well into the night.”

Have you signed up for your local PurpleStride? Grab your friends and family and go! www.purplestride.org