Home May is a Family Affair Ian’s PurpleStride Family 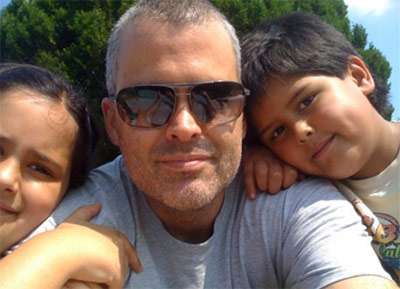 Ian snapping a selfie with his two older children.

Our theme for May is “A Family Affair,” but not all families are blood-related. One of our top fundraising teams from PurpleStride New York City, Ian’s Team: I’m a Believer, is one such family. The team was formed in support of Ian Van Tuyl, who was diagnosed in February with late-stage pancreatic cancer. But this family’s story begins long before that.

Ian started working at 2U, an online learning company, back in 2010 and was immediately welcomed into the fold. As the Chief Content Officer, Ian oversees the team that works with university professors to develop their courses. His co-workers describe him as a straight shooter full of transparency who genuinely cares about those around him. His team is very close, collaborating with each other and helping to ensure everyone achieves success through teamwork and delicious team lunches (great food makes everyone more efficient). 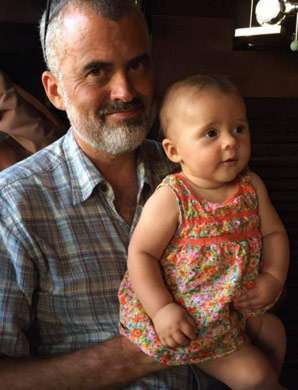 Ian hanging out with his youngest child.

Under his exterior, Ian is a man full of goodwill, humor, Sichuan and oysters, with an endearing charm and the uncanny ability to speak eloquently on any subject.  Ian is also a devoted family man. His kids are frequent visitors to the office, so all of Ian’s co-workers have watched them grow over the years, and while his youngest is just 1 year old, the way Ian’s face lights up when talking about her is indescribable. 2U is truly an extended family to all of them.

So, the diagnosis: It came as an incredible shock to Ian. But he is currently in treatment, hoping to power through and head back to work. When his 2U family (they call themselves 2Utes) heard the news, they were floored and decided to do what they do best: band together to get results.

They quickly found the Pancreatic Cancer Action Network and PurpleStride, and it seemed like the perfect opportunity to come together as a team, show their support for Ian and raise awareness.  They created Ian’s Team: I’m a Believer, and in less than two months, they had recruited 118 people and raised more than $23,500, making them an Elite Team (a top fundraising team) and also giving them Top 10 Team status and getting their team name on the back of the event T-Shirts for event day on April 9. 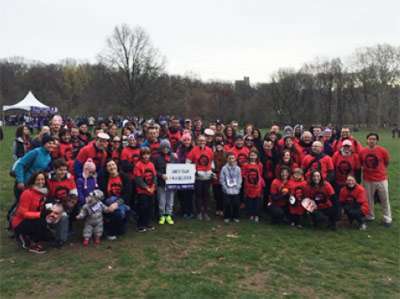 Ian’s Team: I am a Believer at PurpleStride New York City.

But one event wasn’t enough for Ian’s 2U family. They’re a multi-location company, with additional offices in Maryland, California, Colorado, North Carolina, and even Hong Kong. They decided to expand their impact nationwide and seized the opportunity to ensure everyone in the company could be involved by participating in multiple events across the country.

Ian’s story is obviously an inspiring one – a company banding together as a family to Wage Hope in the fight against pancreatic cancer together. This is a fantastic example of how company teams can make a difference. Our Company Teams Program is a great way for companies, large and small, to partner with us. Now, during our heaviest PurpleStride season, we’re thrilled to have such a dedicated group joining the Pancreatic Cancer Action Network family to change the future for pancreatic cancer patients like Ian.

Check out Ian’s Team: I’m a Believer for PurpleStride Washington, D.C. here, and don’t forget to sign up for your local PurpleStride – get your company or family (or both) involved, too, and multiply your impact! Full event listing can be found at purplestride.org.