Home May is a Family Affair Sorority Sisters for Life: Team RoRo Honors One of Their Own

There was not one woman in the Florida State University Alpha Chi Omega (AXO) house between August 1989 and May 1992 who did not know and love Robin Tubbs. Anne Reed, Robin’s dear friend and sorority sister, describes Robin as one-of-a-kind. 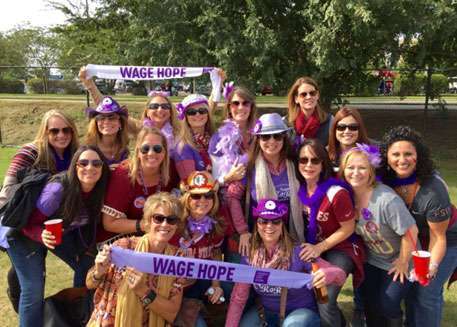 Sisters of the Alpha Chi Omega (AXO) sorority don their Florida State University colors of garnet and gold, plus purple, in honor of their sorority sister Robin, who died of pancreatic cancer in 2015.

“She was caring, sweet and irreverent in the most endearing way – she was a leader and never was afraid to be herself. She had the most beautiful and infectious laugh and was a friend to all,” Anne said.

Robin was optimistic and didn’t have a tolerance for negativity – even when she was diagnosed with pancreatic cancer in November 2014. Upon learning the devastating news, the AXO sisters who were closest to Robin allowed the news of her illness to circulate among other alumni through a private Facebook group message.

“Robin’s illness brought all of the sisters closer together,” Anne said. “As her disease progressed, it became clear that the more than 80 sisters in the message group who knew and loved her needed to do something. Robin had plenty of prayer blankets and memory books, so we had to brainstorm another way to show our support and take action.”

During what turned out to be Robin’s final chemo treatment, she talked to Anne about her diagnosis. Robin, who never shied away from taking action in the face of difficult odds, remained strong and wanted to do as much as she could to beat the disease.

“She turned to me and said, ‘Anne, do you know that….’ and started telling me about pancreatic cancer. She learned all of the information from the Pancreatic Cancer Action Network’s website.

“Robin was a doer. She took action, did her research and wasn’t the type to sit around. During that conversation I made a promise to help her create change.” Anne said.

When Robin learned that the chemo wasn’t working and they were going to stop treatment, she looked into other options. She was looking to get enrolled into another clinical trial, but she passed away on Aug. 25, 2015, on her birthday. She was 45 years old.

After brainstorming and much coordination, the AXO sisters decided to participate in pancreatic cancer awareness walks in Robin’s honor in Cleveland, Ohio; Tallahassee, Fla., and Atlanta, where Robin had lived since graduating in 1992.

“We created Team RoRo to honor Robin and to help her fight this awful cancer. You knew who we were because we were wearing ‘Team RoRo’ gear — boas, hats and custom-designed T-shirts. We named the team after her 3-year-old stepson.”

Team RoRo consisted of approximately 50 registered members, plus an additional 25 family, friends and sorority sisters who did not register under the team name. 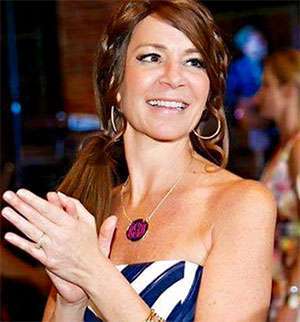 Robin Tubbs passed away from pancreatic cancer in 2015.

They raised over $10,000 for the Pancreatic Cancer Action Network.

Anne knew Robin was there in spirit at PurpleStride Atlanta.

“The whole PurpleStride experience was pretty amazing,” she said. “Robin gave us the gift of sisterhood, and we were able to celebrate her life and make HER dream a reality through this event. We miss her terribly, but we know we have an Alpha Chi angel watching over us from heaven.”