They are the 501st Legion, an army of Stormtroopers fighting on behalf of the bad guys in the movies. But in real life, they are an army of “Star Wars” enthusiasts dedicated to doing good deeds. 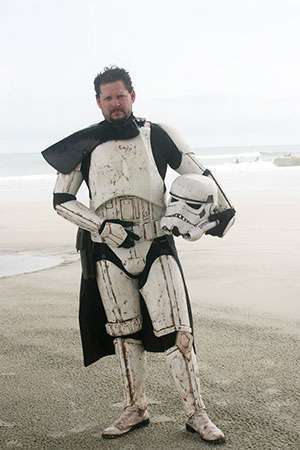 The man behind the mask, Michael, a 501st Legion member and Pancreatic Cancer Action Network volunteer continues to Wage Hope after losing his dad to pancreatic cancer in 2014.

For one Stormtrooper and 501st Legion member Michael Johnson, of Florida, doing a good deed just scratches the surface. He joined forces with other Stormtroopers to raise awareness for pancreatic cancer when his dad was diagnosed with the disease.

The 501st Legion formed in 1997, is a costuming non-profit organization where members dress up and bring the magic of “Star Wars” to life. It is a volunteer organization made up of almost 9,000 members worldwide. The Stormtroopers often participate in and make appearances at fundraising walks and events to raise awareness for different causes that benefit the local community.

Michael joined the Legion in 2007, but has been inspired and mesmerized by “Star Wars” ever since the first film, A New Hope, made its debut in 1977.

“I was just a kid when the first movie came out and I immediately knew that I was drawn to the Stormtrooper character. All I wanted was to wear Stormtrooper armor!” Michael said.

Not only does volunteering for the 501st Legion allow Michael to pursue his passion as a costumer, it allows him to give back to his community.

“Our common bond over ‘Star Wars’ allows us to come together and support each other.
We donate a lot of time to our local communities and work hard to raise awareness for causes that are close to our hearts. ‘Star Wars’ is everywhere and at the end of the day, we show up at events to put smiles on people’s faces and bring hope to those who need it the most.”

When Michael’s dad, whose nickname was “Pee Paw,” was diagnosed with pancreatic cancer in July 2014 and passed away that December, Michael used his Stormtrooper powers to bring the 501st Legion members together to raise awareness for the disease and honor his dad.

Michael, a Pancreatic Cancer Action Network volunteer for the Jacksonville Affiliate, coordinated the team for PurpleStride 2014 and attended PurpleStride in 2015 in his armor. He decided to make a tribute to his dad by creating the PurpleStride team “Pee Paw’s Purple Legion.” 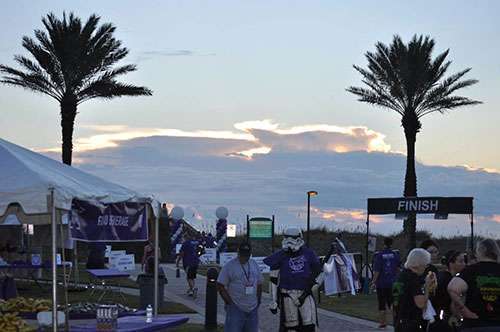 Michael speaking with a survivor before PurpleStride Jacksonville 2015.

Through that group of Stormtroopers, he received hope when he needed it the most.

Members of Pee Paw’s Purple Legion not only “trooped” with Michael at PurpleStride, but they presented his dad with a custom-made purple pauldron, a piece of leather shoulder armor that Sandtroopers (a specific type of Stormtrooper) wear in the “Star Wars” movies, before his passing to show their support.

“I was so thankful for the outpouring of support from the Legion that I received upon my dad’s diagnosis. They were there with me to Wage Hope for him. It creates a feeling of hopefulness when your friends come and support you out of the kindness of their hearts,” Michael said.

Michael is inspired by all the people he meets through volunteering who are dedicated to this cause.

“I am touched by survivor stories and am inspired by the way they keep moving forward despite the pain. I take a very personal approach to my volunteering efforts and am determined to make a difference in Northeast Florida and for those who are affected by this disease.”

Join others like Michael and get involved in your community by attending a local PurpleStride event! Find one in your area here.