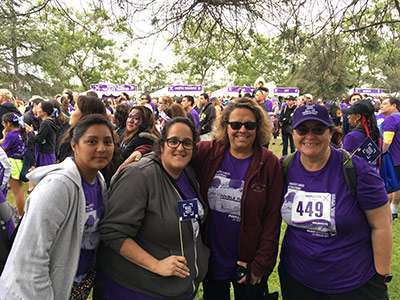 Who knew you could raise awareness about a disease and fight it by dancing? Students at Sally Ride Elementary: A SMArT Academy, located in Los Angeles and named after famous astronaut and philanthropist Sally Ride, showed their spirit and determination to raise awareness for pancreatic cancer by participating in the school’s dance-a-thon.

The students that participated in the event ranged from kindergartners to fifth-graders. They were filled with happiness and excitement to help others and had so much fun that they wanted to stay longer.

“These children are enthusiastic about a lot of subjects and love learning. They are a great group of kids and want to do good for others and help their community,” said Christina Machado, second and third grade teacher and community service committee member at Sally Ride Elementary School.

The event was organized by a team of teachers at the school. The students created posters promoting the dance-a-thon and, more importantly, danced their hearts out at the event.

“Students got a sense of fulfillment from participating in the dance-a-thon and wanted to do as much as they could to help,” Christina said.

The Sally Ride Astronauts team takes a PurpleStride selfie before they walk.

“One girl said, ‘I didn’t do enough, I only collected $8.’ We congratulated her on doing a good job helping others and making an effort – no act of kindness is too small. Her worried face quickly turned into one of joy! For the students who did not raise money, they showed up wearing purple.”

The money raised at the dance-a-thon went toward the school’s PurpleStride Los Angeles team, the Sally Ride Astronauts.

Christina, whose aunt passed away from pancreatic cancer in 2012, had an extra special PurpleStride not only because she was participating for the school fundraiser but also to Wage Hope for her aunt.

Sally Ride Elementary takes an active approach to volunteerism and includes learning within the volunteering experience.

“As a part of our school plan, we focus on community service as well as service learning. For the second year in a row, we have an active community service committee that puts together events focused on a different theme each month. As the program grows, we are looking to involve students in the planning aspect of the events as well,” Christina said. 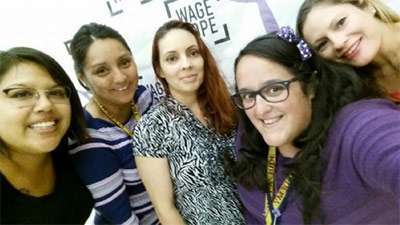 The teachers from Sally Ride Elementary that organized the dance-a-thon.

Looking forward, they plan to organize another dance-a-thon to raise awareness and funds for the disease as a tribute to Sally Ride herself, who passed away from pancreatic cancer in 2012.

“We will offer the dance-a-thon again, as a great tribute to Sally Ride.”

When asked how the students involved in this fundraiser embody the spirit of Sally Ride, Christina explained that their open hearts and willingness to help others embody the values that reflect Sally Ride’s belief that all children can “reach for the stars.”

“Sally Ride created programs for children and a camp to promote girls getting involved in the Science, Technology, Engineering and Mathematics (STEM) fields. She was altruistic and wanted to help others. That’s what students at Sally Ride Elementary School want to do, too.”

Have you signed up for your local PurpleStride? Grab your friends and family and go! www.purplestride.org