2016 Highlights of Advocates in Action 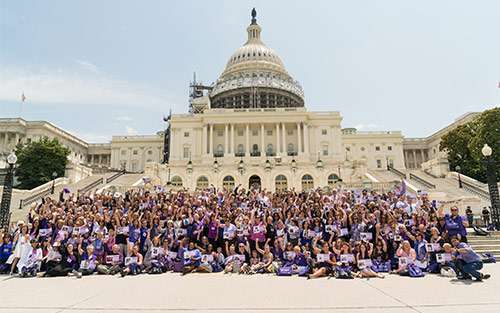 In 2016, Pancreatic Cancer Action Network advocates raised their voice and moved the needle toward our goal of doubling survival by 2020. The work of our advocates in urging Congress to make cancer research a priority is a critical part of reaching our 2020 goal, as approximately 80 percent of all pancreatic cancer research funding comes directly from the federal government. A more robust pancreatic cancer research program and increased federal funding is vital to make progress in this disease. Our grassroots advocates play an important role in ensuring that happens.

Here are the highlights of an extraordinary year of grassroots advocacy:

Our key priority in 2016 was to get Congress to increase federal research funding for the National Institutes of Health (NIH) and the National Cancer Institute (NCI), including funding for Vice President Biden’s Cancer Moonshot.

Over 17,000 advocates heeded our call throughout 2016 and sent nearly 50,000 messages to Congress. Our advocates helped put a $2 billion increase for the NIH on the table for Congress’ consideration and nearly got it over the finish line. When it became apparent that Congress would pass a short-term funding package—Continuing Resolution (CR)—and fund the vast majority of federal programs at 2016 levels, your advocacy resulted in a CR which provided an additional $300 million in cancer research funding specifically for the Cancer Moonshot. This six percent increase is an impressive accomplishment, as it happened in a year when most other programs will be flat funded.

You Raised Your Voice and Congress Heard You

We cannot attribute our success on Capitol Hill in 2016 to just one phone call, email or congressional visit — but rather to the strength of our over 17,000 advocates who responded quickly and consistently to our calls-to-action to urge Congress to increase federal funding for medical research.

We Wage Hope as One United Voice

The passage of the 21st Century Cures Act with the inclusion of funding specifically for cancer research is a testament to the hard work and determination of thousands of our advocates nationwide. Getting this legislation over the finish line represents who we are – that we won’t take no for an answer and we never give up.

P.S. Don’t want to wait until 2017 to help make an impact? Please make a donation today to show how you are committed to making a difference in the fight against pancreatic cancer.