A Pancreatic Cancer Survivor’s Tips for Your First Advocacy Day 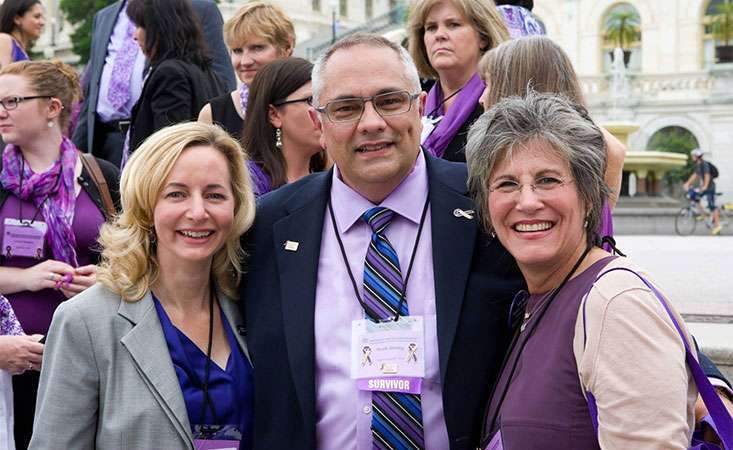 Eleven years ago, Scott Strong listened as his doctor told him the news: his neuroendocrine tumor was the most aggressive the physician had ever seen. Three years later, after surgery and a removed gallbladder, Strong attended his first Advocacy Day in Washington, D.C., as a pancreatic cancer survivor. 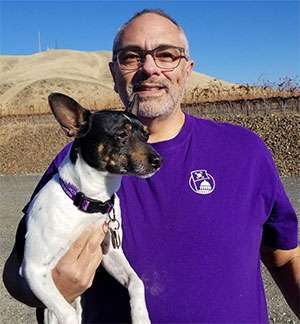 Strong and his dog, C.J., show their pancreatic cancer advocacy in Prosser, Wash., earlier this year. Strong is wearing his Advocacy Day T-shirt, while C.J. sports a purple PanCAN collar.

Today, as Strong prepares for his seventh Advocacy Day event and 11th year as a pancreatic cancer survivor, the need for research funding feels as urgent—and as meaningful—to him as ever.

The first time Strong attended Advocacy Day, he was both excited and nervous to meet members of Congress in Washington, D.C. It’s a feeling many advocates share with him during their first event—including his son, who attended Advocacy Day a few years ago on his 21st birthday. Strong’s advice is simple: Know your story. 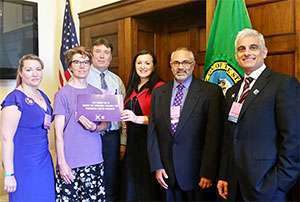 “You know your story, as a survivor, a caregiver, a family member of someone affected by this disease. If you’re able to talk about that, the rest of it will come,” Strong said. “Know your story, be yourself and don’t be intimidated by the process. The members of Congress are regular people like you and me; they just have the ability to wield a little more power every now and then.”

When Strong thinks about all the Advocacy Days he has experienced, one word comes to mind: meaningful. Every email, every phone call and every visit to your representative’s office has a cumulative effect. And if first-time attendees have any doubt that their involvement matters, he often shares a story from Advocacy Day a few years ago. 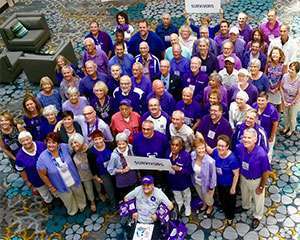 Pancreatic cancer patients form a purple wave of hope as they advocate for increased research funding.

When there isn’t a constituent for a particular district, someone from the group drops off packets to that representative’s office. It was one of those times, so he went to the Congressman’s office, packets in hand—“not a constituent, just a guy with a packet,” as Strong describes it. He shared his story with the Congressman’s aide and asked if there was any reason why the representative wouldn’t support pancreatic cancer research funding. The aide said he thought the Congressman likely would sign on to the pancreatic cancer research funding bill.

Strong left feeling hopeful, but he made a mental note to follow-up the next day. The next morning, he saw the Congressman’s name listed as one of the measure’s sponsors.

“It was only because I stopped by that he signed up. I made something happen,” Strong said, thinking back to that day. “Everybody can do that. Everyone can have a connection with their member of Congress and make a difference.”