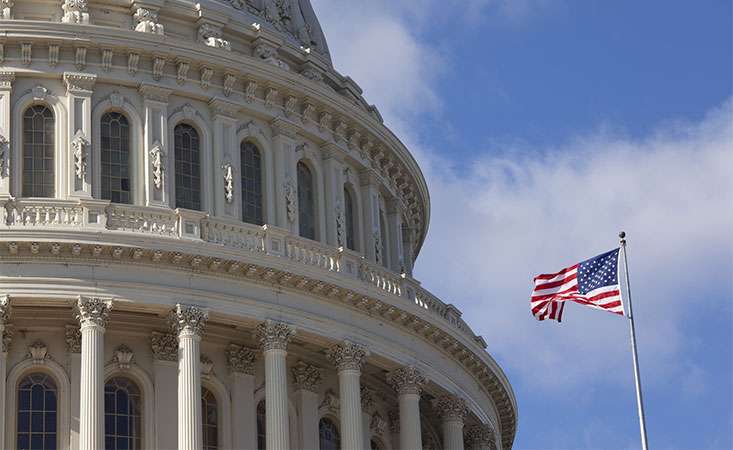 One of the Pancreatic Cancer Action Network’s (PanCAN) priorities in the 116th Congress is to urge Congress to create a dedicated pancreatic cancer research program at the Department of Defense (DoD). We have been laying the groundwork through congressional meetings on Capitol Hill, in-district meetings and conversations with our champions in Congress.

“With many new members of Congress this year, it was important for PanCAN’s dedicated Advocacy Leaders to begin discussing this issue with their elected officials in January,” said Meaghan Slater, associate director of advocacy at PanCAN.

PanCAN launched a campaign in mid-March to build bipartisan support in Congress to create this program in the fiscal year 2020 Defense Appropriations bill.

Working with our champions – Representatives Anna Eshoo (D-CA) and David McKinley (R-WV) in the U.S. House and Senators Sheldon Whitehouse (D-RI) and Mike Crapo (R-ID) in the Senate – we asked members of Congress to show their support by signing onto Dear Colleague letters addressed to the House and Senate Appropriations Defense Subcommittees.

Thanks to the hard work of the pancreatic cancer community and our advocacy volunteers, 102 Representatives and 25 Senators added their names in support of creating this dedicated research program! In addition to personal grassroots outreach, we also had a record response to our take-action emails from around the country, with over 10,000 constituents sending messages to their legislators.

These results show that Congress listens to their constituents – in fact, one congressional staffer specifically told our volunteer that her boss signing the letter was “very much due to your passionate advocacy and follow-through.”

Why the Department of Defense?

Along with the National Cancer Institute, the DoD is an important source of funding for cancer research. The DoD has been funding medical research since 1992 through the Congressionally Directed Medical Research Program (CDMRP).

CDMRP was established to target critical research gaps and develop breakthrough technologies that benefit both the military and the American public by funding “high impact, high risk and high gain projects that other agencies may not venture to fund.”

Since 2011, pancreatic cancer has been included as one of several cancers funded through the DoD’s Peer-Reviewed Cancer Research Program. However, research into the disease is still underfunded compared to its severity.

“Recognizing that tomorrow’s moments depend on today’s investment in lifesaving pancreatic cancer research, advocates from all 50 states contacted their members of Congress,” Slater said.

Establishing a pancreatic cancer research program at the DoD will provide a dedicated source of funding for additional focused research for a disease with no early detection strategy and limited treatment options.

What’s next now that we know there is bi-partisan support?

This bipartisan support demonstrates to the appropriators in both chambers that there is strong support on both sides of the aisle – but this is just one of many steps before this is a done deal.

In the coming months, Congress will set spending priorities for fiscal year 2020. As decisions are being debated, PanCAN will continue to urge Congress to prioritize cancer research funding for the world’s toughest cancer.

This process is supposed to be wrapped up by the end of the fiscal year on Sept. 30, but as the now-divided Congress struggles to work out bipartisan deals, it could potentially drag on until November or December.

We need to keep the pressure on Congress throughout the year. Our next big push will be at National Pancreatic Cancer Advocacy Day in Washington, D.C., where hundreds of advocates will meet with their members of Congress in person to urge them to make pancreatic cancer research funding a national priority.

Increasing federal funding for pancreatic cancer research starts with you.  Join us on Capitol Hill, June 24 and 25 - register today!
Share  Tweet
More on:
You may also be interested in...