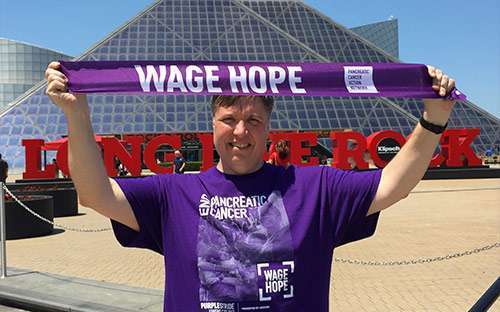 Note: This is the fourth and fifth installment in a 10-part series following Pancreatic Cancer Action Network (PanCAN) volunteer Andrew Miller as he participates in PurpleStride walks throughout the country. Miller traveled 2,042 miles to Cleveland, Ohio, from his home in Portland, Ore. After PurpleStride Cleveland, Miller drove 95 miles to Michigan for PurpleStride Detroit the following weekend. So far, Miller has covered an astonishing 7,165 miles during his PurpleStride travels. In this post, he shares his experience at the two Midwestern cities. 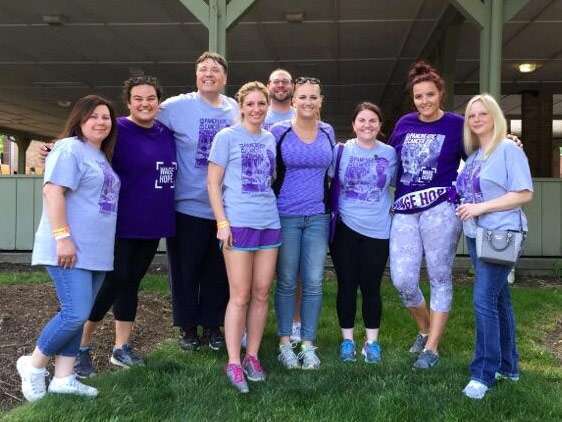 Andrew and the Cleveland Affiliate

As I walked into packet pickup, I met the Team’s Ambassador Tracy Schwab, Volunteer Chair Katelynn Yonce and Regional and Community Engagement Manager Meredith Maimoni. I also met volunteers Kim Patrick, Scott Grant and Sandy Amster Kaufman. The four of us pulled T-shirt requests for Tracy and Meredith, while Katelynn emailed last-minute updates to other volunteers for PurpleStride Cleveland.

Kim’s company donated the location for packet pickup, which was much appreciated. I followed her lead and was soon folding T-shirts quickly as team captains continued to walk in. Kim lost her father to the disease shortly after diagnosis in the spring of 2012, and her dedication this evening was very apparent.

As packet pickup ended, I had some pizza delivered for the volunteers and quickly boxed up the remaining shirts. We drove to the event site at the zoo to help Event Manager Kelly Papanek and PurpleStride Chair Ashley Perry put finishing touches on the pavilion area.

Upon arrival, I helped set up tables, chairs and tablecloths in the registration tent and went over the script with emcee Frank Wiley from WEWS-TV Channel 5 and volunteer DJ Shawn Brewster. As Shawn started the music, I meet Christa Gordon and her family who run the survivor area in memory of her father Daniel Gordon. As I headed back to the stage, I met Facebook friend and Team Captain MaryKaye Mackulin from Ed’s All Star Team. MaryKaye was just the energy I needed as she and her fellow 46 teammates raised $7,335 in honor of their friend Edward Demyan who passed away in 2011. 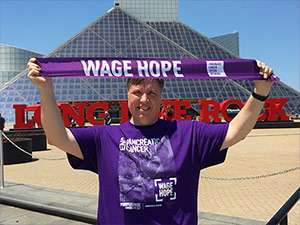 Once the race concluded, the opening ceremonies began. The Cleveland survivors came to the stage and the audience roared with support. Newly diagnosed survivors met fellow survivors who let them know that they are not alone in their battle.

After the opening ceremonies, we took down the event area and shot our volunteer picture. What a wonderful time again meeting volunteers in our organization with new friendships made. 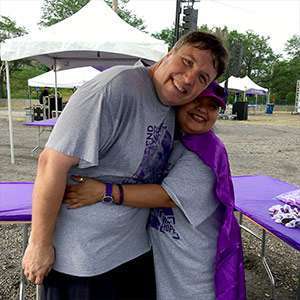 Andrew and Melissa at PurpleStride Detroit

Melissa Buot-Favazza and I arrived at packet pickup just in time to greet the rush of PurpleStride Detroit participants who were ready to claim their event day materials. DiAnn Papp and Regional Director Cassandra Clark joined us, and we completed the early pickup rush.

During the afternoon Melissa shared her story of how she volunteers in memory of her mom, Dennie Buot, who passed away in 2013. She and I became Facebook friends and we both looked forward to volunteering the following day at the event. Packet pickup ended at 8 p.m. We loaded the remaining T-shirts into our vehicles and called it a night.

I arrived at the event at 6 a.m. and started unloading water and food with several other volunteers. Then I set up the survivor tent with another early-arrival volunteer.

After set-up, I got to meet Donor and Corporate Ambassador Meghan Combs and Advocacy Chair Monica-Amit Mishra with whom I had corresponded before PurpleStride Detroit.

At the survivor tent, I met survivors Frank McPherson, Tonya Markland and eight-year survivor Rose Ireland-Black. It was great to see the Detroit survivors gather in front of the stage during the opening ceremonies to be acknowledged by their friends, family and fellow PurpleStride participants.

I participated in calisthenics (toe touches and jumping jacks) before the walk and felt like I was in gym class again! Once the 5K began, I took my place on the last turn of the route to cheer on the runners upon their return.

Denver PurpleStride is just one week away, and I look forward to seeing the Colorado delegation and core volunteers.

Wage Hope at PurpleStride, the walk to end pancreatic cancer, by registering for an event near you!