Pancreatic Cancer News  As the rates of incidence and death in other major cancers are declining, pancreatic cancer is on the rise

As the rates of incidence and death in other major cancers are declining, pancreatic cancer is on the rise 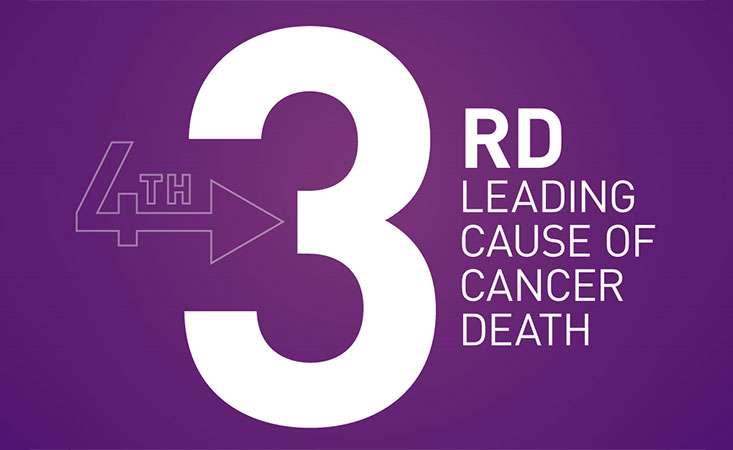 The five-year survival rate for pancreatic cancer increased slightly, moving from 7 to 8 percent*.

However, pancreatic cancer deaths will surpass those caused by breast cancer, moving the disease from the fourth to the third leading cause of cancer-related deaths in the United States.

Though the news is disheartening, it’s not surprising.

We predicted this shift in a May 2014 study published in the journal Cancer Research. In this same study, we also found that pancreatic cancer is predicted to become the second leading cause of cancer-related death in the United States around 2020, second only to lung cancer.

“It’s time to shine a brighter spotlight on pancreatic cancer,” said Julie Fleshman, JD, MBA, President and CEO of the Pancreatic Cancer Action Network. “These statistics relay an even greater urgency to incite a national movement, focused on research, that will result in new treatment options and better outcomes for patients battling this disease.”

The rate of incidence and death in pancreatic cancer is due to several factors, including demographic changes – an aging population and changes in ratios of minority populations – as well as the lack of early detection or effective treatment options for the disease.

To combat this upward trend, we will continue our work to double survival by 2020 through our research investment, government advocacy, community outreach, patient services and support of novel initiatives like Clinical Trial Finder, Know Your TumorSM and the Patient Registry.

“We are at a critical point in history for this disease. Breast cancer advocates have paved the road for us and shown us what is possible,” added Fleshman. “With more funding support and focus, we can expedite progress and change patient outcomes.”
*Rates are adjusted for normal life expectancy and are based on cases diagnosed in the SEER 9 areas from 2005 to 2011, followed through 2012.