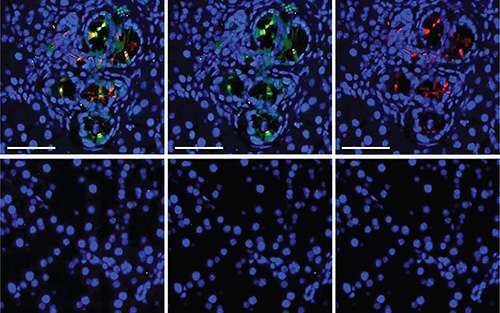 IL-13 in pancreatic tumors in mice 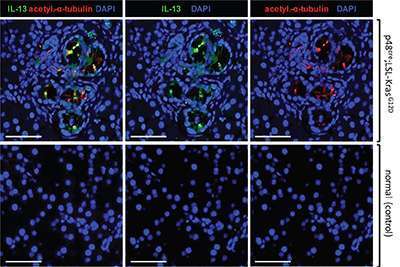 Published on May 16 in Cell Reports, the study describes a protein, called interleukin-13 (IL-13), that gets released by precancerous cells of the pancreas – cells that are just beginning to take on early characteristics of cancer. One of the hallmark features of fully-developed pancreatic tumors is the presence of a dense, complex mix of cellular and tissue types known as the stroma.

In the study, senior author Peter Storz, PhD, and his colleagues across multiple institutions, present evidence that the release of IL-13 causes macrophages to behave abnormally. The rogue immune cells secrete factors that lead to the progression of precancerous cells into invasive cancer and to the recruitment of other cells to gather at the tumor site and form the stroma.

Importantly, the authors of the paper determined that neutralization of IL-13 – blocking its ability to bind to and activate macrophages – led to reduction of stroma and a slowing of pancreatic tumor growth in mice.

“Next steps are to develop clinical trials to test blockade of IL-13 in combination with standard of care therapy,” Storz said.

Storz was the recipient of a 2008 PanCAN Career Development Award, funded in memory of Patty Boshell. For this paper, he collaborated with two fellow 2008 grantees – David Dawson, MD, PhD, at UCLA, and Nabeel Bardeesy, PhD, at Massachusetts General Hospital, whose grants were funded in memory of Seena Magowitz and Randy Pausch, PhD, respectively.

“My Career Development Award was the first grant I obtained as an independent researcher,” added Storz. “It allowed me to connect with other investigators in the field such as Dave Dawson and to establish a collaborative network.”

Help us continue to support leading-edge research projects like this to benefit pancreatic cancer patient outcomes.