Family Takes the High Road in the Fight Against Pancreatic Cancer 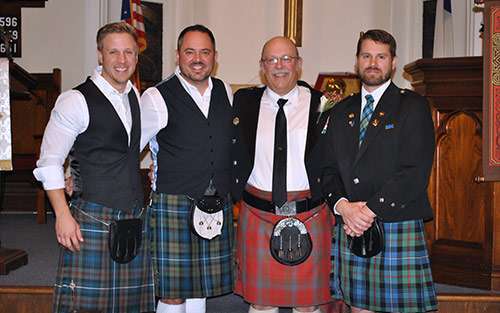 Devon, Donavon, Dan and Adam Roberson will be walking in their ancestors footprints for Crossing Alba: a Pilgrimage Home.

“You take the high road and I’ll take the low road, and I’ll be in Scotland afore you,” starts the famous Scottish song “Loch Lomond.”  It’s also a perfect soundtrack for the Roberson clan and their Wage Hope My Way fundraiser, Crossing Alba: a Pilgrimage Home—an adventure that will take them hiking and camping across Scotland, from the Isle of Mull to the Roberson ancestral home of Pitlochery.

Devon, Donavon, Dan and Adam Roberson will be walking in their ancestors footprints for Crossing Alba: a Pilgrimage Home.

Family patriarch Elton and his oldest son, Marton, were both lost, much too young, to pancreatic cancer. Dedicated to their memories and inspired by the 2010 film The Way, Donavon Roberson, his father Dan, brother Adam and cousin Devon will make the trek clad in their clan’s tartan kilts. Their journey starts on April 29, and the plan is to complete the journey around May 10.

As personal as this trip is to the Robersons, they also wanted to make sure it had a larger impact. They decided to make it a fundraiser. And before they’ve taken one step on Scottish soil, they’re more than halfway to their goal. That happened quickly, Donavon said. Their sister-in-law contacted the Herald-Mail, published in Hagerstown, MD, about doing a piece on the trip. Once the story came out, they started actively sharing, and most importantly, asking for support.

“Before the newspaper piece, we were just telling people to visit our Facebook page, or Twitter,” Donovan said. “But then we started asking people to donate.”

And that’s when the fundraising spiked.

During their journey, the Robersons will be using their social media pages and Facebook Live to create virtual events along the way, such as Raise A Glass, a Moment of Silence and Color Me Purple, to not only chronicle the emotional journey, but to involve the community they’re creating.

Crossing Alba: A Pilgrimage Home is a deeply personal journey for each of the Robersons. Once they reach Pitlochery, they’ll have covered 168 miles of Scotland, paid homage to their ancestors and raised funds that directly contribute to the fight to end pancreatic cancer.

Keep up with the Roberson’s journey as they update their Facebook page, and follow their fundraising progress at Crossing Alba: A Pilgrimage Home.