Friday Fix: Which Produce Do You Really Need to Buy Organic? 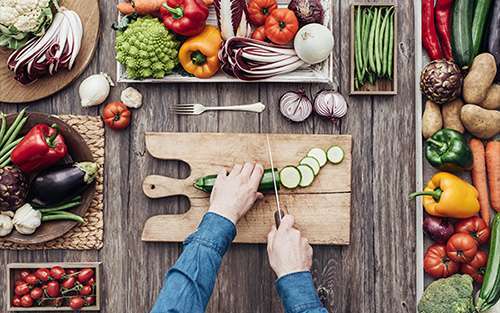 “Organic” is quickly becoming one of the most common words in produce aisles across the country. But although 70 percent of shoppers in a recent survey said they buy organic food, these items often come with a higher price tag – about 47 percent more expensive, on average, according to one Consumer Reports study.

People buy organic to reduce their exposure to synthetic chemicals. But price prevents many shoppers from filling their fridges with all-organic foods. So, which foods are most important to buy organic?

“If you need to choose, the most important fruits and vegetables to buy organic are the ones that tend to have higher levels of chemicals otherwise,” said Maria Petzel, senior clinical dietitian for the Pancreas Surgery Program at MD Anderson Cancer Center and a member of the Scientific and Medical Advisory Board for the Pancreatic Cancer Action Network.

The Environmental Working Group’s 2017 Shopper’s Guide to Pesticides in Produce ranks 50 common fruits and veggies based on their pesticide levels in U.S. Department of Agriculture and Food and Drug Administration testing. Here’s their rundown of the produce with the most, and least, amount of pesticides after washing and preparation.

12 fruits and veggies to buy organic

Topping the EWG’s list of the most pesticide-laden produce—a club EWG calls “The Dirty Dozen”—are strawberries. Next in line? Spinach, which had on average two times the amount of pesticide residue by weight when compared any other crop. Here’s the full list of the produce with the most pesticides, in order:

More than 98 percent of strawberries, spinach, peaches, nectarines, cherries and apples sampled tested positive for residue of at least one pesticide. If you’re going to pick and choose what to buy organic, go for these fruits and veggies.

15 fruits and veggies not necessary to buy organic

Now, for the good news: There are also several fruits and veggies that had very low pesticide levels. Not surprisingly, produce that must be peeled tend to top the EWG’s “Clean 15” list. Sweet corn, avocadoes and pineapples came in as the most pesticide-free. Here’s the full list, in order from lowest pesticide levels:

Pancreatic cancer patients and caregivers can access comprehensive disease information, including diet and nutrition tips, recipes and a booklet on the subject – all reviewed and approved by renowned leaders in the field – by contacting the Pancreatic Cancer Action Network’s one-on-one PanCAN Patient Services support service by phone or email.

Come back to our blog each week for more of Friday Fix: Your Weekly Nutrition Supplement!