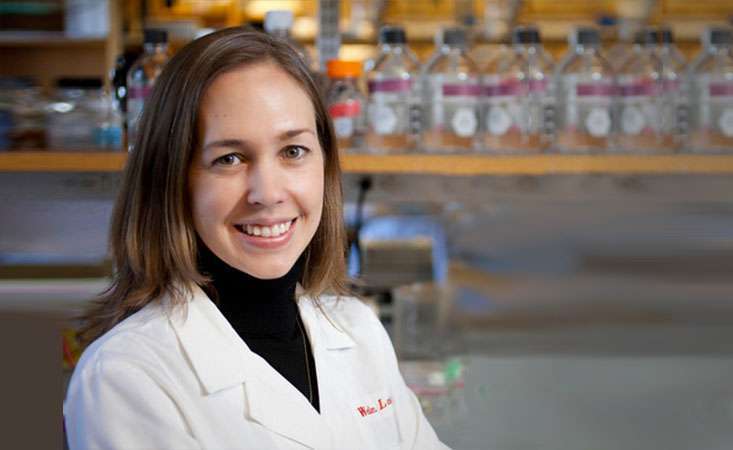 Kathryn Wellen, PhD, studies the cellular changes that can lead to pancreatic cancer.

Even before certain cells of the pancreas become cancer, changes occur in their ability to break down nutrients, according to a research team’s new study. The paper, published in the American Association for Cancer Research’s prestigious Cancer Discovery journal, was spearheaded by Kathryn Wellen, PhD.

“The PanCAN grant was our first funding to study pancreatic cancer,” Wellen said. “It was crucial for our ability to undertake this project.”

She continued, “We are now applying for NIH [National Institutes of Health] funding to further support this work.”

The paper focused on a metabolic enzyme, ATP-citrate lyase (ACLY), that produces a molecule called acetyl-CoA. Acetyl-CoA is produced from nutrients and is needed for energy and survival. But the research team found that in the presence of a cancerous KRAS mutation, acetyl-CoA helps acinar cells of the pancreas begin taking on properties of ductal cells – a step that prepares these cells to become cancer.

After finding that ACLY contributes to the transformation of healthy pancreas cells to cancer by producing acetyl-CoA, Wellen and her research team asked whether blocking the activity of ACLY could slow or stop the development of pancreatic tumors.

“Our evidence suggests that blocking ACLY may slow the development of tumors,” Wellen said, “but once tumors form, they are very metabolically flexible and can overcome the loss of ACLY activity.”

Therefore, she and her colleagues seek to devise other strategies to stop the processes activated by acetyl-CoA. Early results suggest that a combination therapy involving blocking two different pathways that depend on acetyl-CoA can more effectively slow down the growth of pancreatic cancer cells in the lab.

“Studying how metabolic pathways influence pancreatic cancer development and progression – and how to block these pathways – has become a major priority for my research group,” Wellen said. “I really appreciate the work PanCAN is doing and that they support and welcome new researchers to the field.

“I probably would not be working on pancreatic cancer at all, if not for the Career Development Award.”