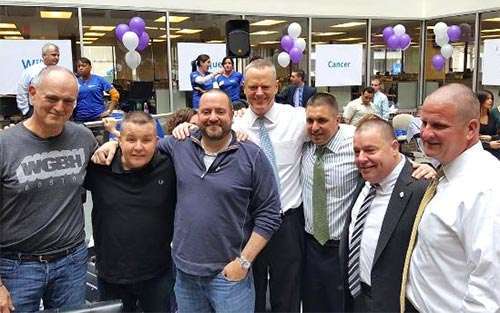 Boston is abuzz this week, not only with the Boston Marathon days away, but also with thousands of buzz cuts supporting pancreatic cancer research! On April 13, Massachusetts Governor Charlie Baker and Boston Red Sox President Sam Kennedy joined Rob Hale, CEO of Granite Telecommunications, and over a thousand Granite employees at the company’s fourth annual “Saving by Shaving” event. In total, the event raised $5 million for pancreatic cancer research at Dana Farber Cancer Institute.

Pancreatic cancer is one of the nation’s deadliest major cancers with a five-year survival rate of just 9 percent. The disease now kills more people than breast cancer, recently becoming the third leading cause of cancer-related death in the United States and projected to become the second-leading cancer killer around 2020.

A Huge, Thank you to everyone who joined us today and helped us get to $5M. #SavingbyShaving https://t.co/kv3tYfFvIa

“From the labs of Dana Farber, to ‘Saving by Shaving’ and PurpleStride, the walk to end pancreatic cancer that will take over the Boston Common this fall, the Boston community’s passion and dedication to pancreatic cancer is exemplary,” says Julie Fleshman, JD, MBA, president and CEO of the Pancreatic Cancer Action Network. “Special thanks to Governor Baker and Rob Hale for continuing to be such strong leaders in this fight. We are grateful to Wage Hope with committed individuals in Boston and across our nation.”

Want to make a difference? Get involved with the Pancreatic Cancer Action Network in the Boston area and beyond!