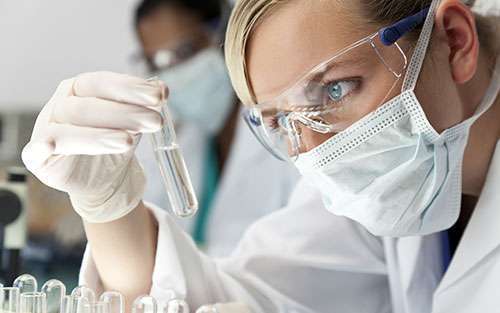 Yesterday, Medscape published a feature story detailing the science behind pancreatic cancer. The article recounts the devastating statistics of the disease and highlights the advancements being made despite many challenges.

At the heart of the article is PanCAN’s revolutionary Precision PromiseSM initiative that is bringing together integral members of the pancreatic cancer community to accelerate research progress for the disease. Several of those experts provided commentary for the article including:

Read the full article written by Cynthia Green shown below.

Receiving a diagnosis of pancreatic cancer is always devastating, and having to deliver one is very difficult as well. It is common knowledge that the prognosis is rarely good. Many patients have read about such public figures who have battled the disease—Patrick Swayze, Steve Jobs, Luciano Pavarotti—and lost. According to the American Cancer Society, some 53,670 people will be diagnosed with pancreatic cancer in 2017 and 43,090 people will die from it. Pancreatic cancer recently received the dubious distinction of moving from fourth to third place as the leading cause of cancer-related deaths in the United States and is anticipated to become the second leading cause of cancer death by 2020, according to the Pancreatic Cancer Action Network.

Though the data are sobering, advances are being made in both research and treatment, in immunotherapy, multimodality treatments, and potentially breakthrough diagnostic tools.

For patients with pancreatic cancer who have undergone margin-negative R0 or R1 resection of their primary tumor, the combination of gemcitabine and capecitabine has been promoted as the new standard of care. Results from the international, open-label, randomized controlled phase 3 European Study Group for Pancreatic Cancer (ESPAC)-4 trial of adjuvant chemotherapy using gemcitabine combined with capecitabine showed improvement in overall survival compared with gemcitabine alone. In over 700 patients with resected pancreatic ductal adenocarcinomas, those who received the drug combination had an 18% increase in overall median survival of 28 months versus 25.5 months. As reported by Medscape, lead researcher John P. Neoptolemos, MD, professor and the Owen and Ellen Evans Chair of Surgery, University of Liverpool, United Kingdom, stated, “This is one of the biggest-ever breakthroughs prolonging survival for pancreatic cancer patients.”

Preliminary results were first presented at the 2016 American Society of Clinical Oncology (ASCO) meeting. At that time, the improvement in overall survival was described as a “step change” in the care of pancreatic cancer. Updated ASCO guidelines concur that adjuvant gemcitabine and capecitabine should now be the standard of care for those patients with R0 or R1 resection who did not receive preoperative therapy. ASCO advises 6 months of this treatment in the absence of contraindications and within 8 weeks of surgery, assuming complete recovery.

Studies based on decades of surgical experience show that surgical resection alone, even with added adjuvant therapy, still provides a limited median survival benefit of only 20-24 months for patients with localized tumors. Among those with localized pancreatic cancer who undergo a R0 resection, most will experience disease reoccurrence, and overall median survival is about 20 months. The recognition that pancreatic cancer is a systemic disease, rather than localized, has evolved at the time of diagnosis, even among patients with localized disease. Viewing the cancer from that perspective has increased the interest in neoadjuvant therapy and a multimodality approach.

Dr Margaret Tempero, director of the UCSF Pancreas Center and professor of medicine in the Division of Hematology and Oncology, University of California, San Francisco, addressed this approach at the annual meeting of the National Comprehensive Cancer Network 22nd Annual Conference and told Medscape that the traditional approach of waiting to administer chemotherapy until after surgery may allow the disease to advance metastatically. She stated that preoperative chemotherapy might give the patient an “added edge” in terms of survival.

Alok Khorana, MD, medical oncologist and pancreatic cancer expert at the Taussig Cancer Institute of the Cleveland Clinic, agreed that the surgery-first approach might not be optimal with what is understood about the disease. Dr Khorana told Medscape that “the use of preoperative treatment is increasing now that we have more effective regimens, such as FOLFIRINOX or gemcitabine/nab-paclitaxel, with decent response rates. These regimens were used in clinical trials but not in neoadjuvant settings.” He suggests that this would be a logical next step.

Diane Simeone, MD, associate director of translational research at Perlmutter Cancer Center, director of the Pancreatic Center at NYU School of Medicine, and co-chair of the Precision PromiseSM Executive Committee, commented to Medscape, “Although neoadjuvant treatment is not really a new concept, with the Precision Promise initiative, we will be delving into the best way to develop a platform of innovative, randomized platform trials in resectable and locally advanced pancreatic cancer patients. In trials, each patient’s tumor will be comprehensively studied with biopsies before and after treatment, so we can best understand why some treatments work well in some patients and less in others.”

The Precision PromiseSM Initiative: Accelerating Pancreatic Research and Clinical Trials Announced in 2016 by the Pancreatic Cancer Action Network, the Precision Promise initiative is a patient-centric, large-scale precision medicine clinical trial with the ambitious goal of doubling pancreatic cancer survival by 2020. Clinicians, researchers, and diagnostic and drug developers are working together as a consortium to investigate multiple treatment options under one clinical trial design. Each patient’s unique molecular profile will be analyzed to determine the best treatment for that person.

“The traditional approach, we have seen to date, has been challenging, and unfortunately we have not seen an overwhelming number of successful trials,” said Victoria Manax Rutson, MD, chief medical officer, Pancreatic Cancer Action Network. She told Medscape, “Patients need additional options and it’s time we become more precise in our approach to clinical trials. We need to learn faster by evaluating multiple therapies in a timely manner in order to maximize standards of care.”

Gregory Beatty, MD, PhD, chair of the Precision Promise Immunotherapy Working Group at the University of Pennsylvania, explained to Medscape that “Bringing ‘precision’ to the treatment of pancreatic cancer represents acknowledging the challenges we have faced treating this disease over the past two decades. Clinical trials moving forward in pancreatic cancer need to be designed with strong correlatives, rapid assessment of potential efficacy, and a collaborative approach that partners academics and industry.”

“Immunotherapy is a promising therapeutic strategy for pancreatic cancer,” said Dr Manax Rutson. “However, as has been seen with cytotoxics and targeted therapies, immunotherapy has been met with marked resistance to date in pancreatic cancer. Efforts moving forward with immunotherapy in this disease will need to focus on rational combinations designed to harness T-cell immunity and disrupt elements of inflammation that are associated with treatment resistance and poor prognosis.”

Among the thousands of national and global clinical trials, researchers have found that adding an experimental immunotherapy, IMM-101 (under development by Immodulon Therapeutics) to gemcitabine extends survival, particularly in those with metastatic disease. IMM-101 is a suspension of heat-killed Mycobacterium obuense that induces CD8+ T-cell responses.

According to investigator Angus Dalgleish, MD, professor of oncology at St. George’s, University of London, United Kingdom, “IMM-101 wakes up the innate immune response, although it’s not a vaccine per se,” which he relayed to Medscape at the 17th World Congress on Gastrointestinal Cancer. “It’s a bit like a checkpoint inhibitor, but it works in a different way,” said Dr Dalgleish. “It takes the brakes off, starting with the innate immune system.”

The findings are important because IMM-101 is the first immunotherapy agent that can be added to gemcitabine. In addition, the study had patients with more severe disease and the largest percentage of patients older than 65 years.

Addressing IMM-101, Dr Manax Rutson said, “Combining immune adjuvants with chemotherapy holds promise for stimulating immunity against cancer or enhancing the efficacy of chemotherapy. In the intention-to-treat population, gemcitabine + IMM-101 produced a median overall survival of 6.7 months versus 5.6 months with gemcitabine alone in the first-line setting. This finding may suggest the ability of IMM-101 to improve gemcitabine efficacy, but it’s also worth noting that the survival benefit seen here is less than that observed with combination chemotherapy regimens, such as gemcitabine/abraxane and FOLFIRINOX, which have been reported in similar patient populations.”

Dr Manax Rutson continued, “Both vaccines and chemotherapy hold promise for igniting immunity against pancreatic cancer. It is clear that these strategies, though, are—at best—temporizing on their own and even in combination. Improving on their potential will require a more comprehensive mechanistic understanding of efficacy and resistance.”

In the study, a device using experimental light-scattering spectroscopy (LSS) evaluated the malignant potential of 27 cystic lesions from 25 patients in a double-blind comparison with either postoperative histopathology or survival outcomes and achieved 95% accuracy (95% confidence interval, 78%-99%).

The LSS probe, which goes into the mouth and down into the small intestine to lay next to the pancreas, detects the structural changes that occur in cancerous or precancerous cells by bouncing light off tissues and analyzing the reflected spectrum. The researchers intend to eventually be able to undertake in real time an assessment of cysts while the LSS procedure is being performed.

The device was developed and is owned by study coauthor Lev Perelman, PhD, a renowned biomedical engineer at Beth Israel Medical Center and Harvard University.

Study coauthor Douglas Pleskow, MD, interventional gastroenterologist at Harvard and Beth Israel , said that in the United States, pancreatic cysts are being found incidentally in large numbers on CTs and MRIs.

“Scans that look for things like kidney stones or gallstones related to abdominal pain are turning up in increasing numbers of pancreatic cysts,” he told Medscape. An estimated 10%-15% of adults have these cysts, which are associated with aging.

Differentiating potentially cancerous cysts from benign cysts is critical, from both a clinical and an epidemiologic perspective. Proceeding with surgery depends on as accurate an evaluation as possible. Surgery, which is intended to be curative, is still associated with high morbidity and mortality rates.

As also reported in a Medscape article, metabolic profiles known as “metabolomics” have been used to identify new blood-derived metabolite biomarkers, which can distinguish between pancreatic ductal adenocarcinoma and chronic pancreatitis with a high degree of accuracy and at an earlier disease stage than conventional diagnostic testing.

“In patients with chronic pancreatitis with an increased risk for pancreatic cancer, the biomarker signature detected 98% of resectable pancreatic cancers (55 out of 78, stages IA to IIB) with an accuracy of 90.4%,” the researchers report, adding that “this can be regarded as a significant advance in the field.”

The research, led by Markus M. Lerch, MD, professor of medicine at University of Greifswald in Germany, also noted that the pancreatic cancer was detected at an early stage, when surgical resection could potentially increase survival by 30%-40%.

The biomarker signature includes nine metabolites as well as the carbohydrate antigen (CA19-9), which is currently the only blood-based biomarker in clinical use for pancreatic cancer. At present, the test is a research tool. Technical validation as a test for pancreatic cancer has been completed, and plans are underway to have it externally validated.

Giving a nod to these in-development tools, Dr Manax Rutson commented, “As part of our Precision Promise initiative, we also strongly believe that in addition to testing clinical therapies, we need to further validate research efforts in screening and early detection for pancreatic cancer.”