Nurses Stay “Positively Purple” As They Remember One of Their Own 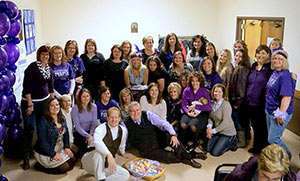 Patty’s Pals is a group of nurses, family and friends who are honoring the memory of Patty Rojas by spreading awareness of pancreatic cancer and raising funds for the Pancreatic Cancer Action Network. Patty lost her battle with pancreatic cancer in November 2011.

Our organization thanks Patty’s Pals during National Nurses Week, May 6-12.

When Patty Rojas was diagnosed with stage IV pancreatic cancer in 2010, a team of nurses and staff came together with a common goal: to help one of their own deal with cancer. Patty’s Pals was formed to support the dedicated ICU nurse and mother of four. As her last stand against cancer, Rojas hoped to educate others about one of the nation’s deadliest cancers.

Patty dedicated her life to caring for critically ill patients, and her fellow nurses wanted to do for her what she had done for thousands in her care. In her last position at St. Rita’s Medical Center in Ohio, Patty was a member of the Rapid Response team – a role that allowed Patty to put mind, body and soul into immediate resuscitation efforts for many acute patients.

Ann Deerhake, MS, RN (left) and Patty Rojas (right) worked together for more than a decade at St. Rita’s Medical Center before Patty was diagnosed with pancreatic cancer in 2010.

Ann Deerhake, Patty’s friend and colleague of 14 years, hosted numerous fundraisers with Patty’s Pals to support the family and ease any financial burden they would face. Throughout Patty’s course of cancer treatment, the nurses would spend hours with their former colleague and her young kids in infusion centers, cook meals and run errands for her family.

Patty’s Pals brought the community together through their signature event “Patty’s Purse Party” – the ultimate girls’ night out for a cause. Patty’s Purse Party was held to celebrate the spirit of their dear friend with a night of games, designer purses, drinks and prizes. Patty died in November 2011 before the first Purse Party took place, but the event was still a success. Proceeds from the event helped pay for funeral costs, and the remainder of the funds went to Patty’s children. Today, now in its fourth year, the event raises money to support the Pancreatic Cancer Action Network. 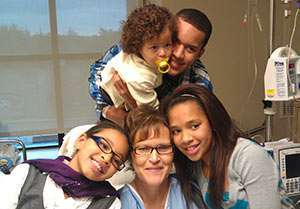 Patty Rojas was a dedicated ICU nurse and loving mother of four in Lima, Ohio.

Ann made a promise to her friend to continue to raise awareness for the disease. Patty’s Pals even has their own special mantra, “Stay Positively Purple.” As a nurse and teacher, Ann utilizes the resources of the Pancreatic Cancer Action Network’s patient services to educate her colleagues and her students about the disease and how to be a patient advocate. Patty’s Pals continues to organize fundraising events and participate in November Pancreatic Cancer Awareness month events to raise the profile of the disease in their hometown of Lima, Ohio.