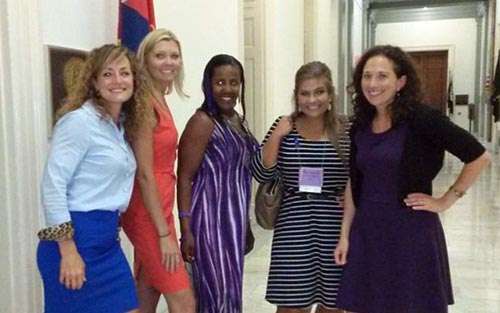 This post was authored by Karen Templeton, a volunteer leader in our Birmingham Affiliate.

My father was my best friend, hero, confidante, supporter and the greatest influence in my life. He was diagnosed with pancreatic cancer on Feb. 18, 2014. 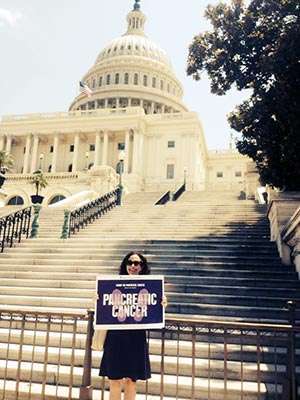 We were told that he had very little time left.

So we went straight to caring for him, and I thought that we’d “just get through it” and never talk about pancreatic cancer again. I didn’t want to be involved or learn anything more about this disease – I was just so horrified by it all.

However, while spending time caring for him, I was taken aback by how sick he had gotten so quickly. Just weeks earlier, he had been so healthy and vibrant.

One day I decided I had to learn more, so I went online, and thankfully my Google search took me straight to the Pancreatic Cancer Action Network website, where I saw information about National Pancreatic Cancer Advocacy Day. It struck me right in the heart. I knew I had to be a part of PanCAN’s efforts.

At first, though, I delayed signing up to go to Advocacy Day because I didn’t want to be away from my dad. I also didn’t know if he’d still be living by June.

But then one evening I got an email that volunteers from Mississippi, where I was living at the time, were needed to go to Advocacy Day. I knew that it was a sign that I should be there. 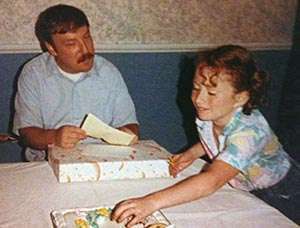 Karen and her dad celebrate a birthday.

We made a decision as a family that I would go, and Dad was particularly proud that I went. He actually participated, too: He made phone calls to Congress during the National Call-in, echoing what I was telling them in-person on the Hill, from the hospital bed we had set up in the house while he was in hospice care.

He died just three-and-a-half weeks after I returned home from Advocacy Day. Before he died, he asked that my family continue to champion the cause so that no one else has to suffer from this disease.

And that’s what we’ve done. In June, my mom and I plan to go to Advocacy Day for the third consecutive year together. And I’ve been a volunteer almost three years now, most recently with my local affiliate in Birmingham.

When I look back on that first Advocacy Day, I went alone with no idea what to expect. My time there…my feelings…it’s hard to put into words. It was incredible to be around others who understood what our family was going through.

If anyone reading this is thinking about going but hasn’t yet stepped up, I say, “Do it! Honor that person you love who’s been affected by pancreatic cancer, and change the course of this disease.” We all know cancer is bad, and we want a cure, or at least an early diagnostic tool, but Advocacy Day educated me about the funding that’s needed to get there. I feel much more informed.

I met one of my closest friends at that first Advocacy Day – Amanda, a volunteer leader in Jackson, Miss. She had lost her dad to the disease, and she really helped me the last few weeks of my dad’s life.

Another memorable moment: I was in a meeting with one of our state’s elected officials, sharing my story, when one of the congressional aides got up and left the room. I thought maybe she had to take a call or get to another meeting.

Then I heard her outside the room crying, and another staffer said that it was because her father had just been diagnosed with pancreatic cancer. I couldn’t believe it. When the meeting was over, I found her and gave her a hug. I gave her my contact info and said, “I’m here if you need anything.” She did contact me, and we stayed in touch. Sadly, her dad did pass away. 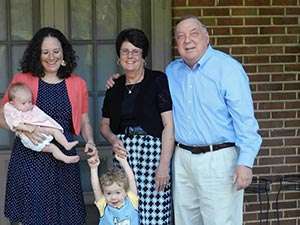 Karen with her parents and children before they lost her dad to pancreatic cancer in 2014.

I had gone to D.C. not really knowing anyone affected by pancreatic cancer, and within one day there, I was surrounded by hundreds of others who had been through what I was going through. And I was able to help another person and support her.

That’s the power of the Pancreatic Cancer Action Network and Advocacy Day – you get this community of people who understand you, who lift you up, who show you that you’re not alone. And that’s a big deal, because with this disease, you often feel so alone, no matter how many people visit you, how many doctors and nurses are swirling around, how many people say they’re sorry.

Advocacy Day showed me I was not alone. And that we’re better together.

Earlier this year, it was so incredible to hear that the five-year survival rate had improved. My mother and I looked at each other and said, “We really ARE making a difference.”

An unforgettable experience – and 600 other people passionate about pancreatic cancer – are waiting for you at the 10th anniversary of National Pancreatic Cancer Advocacy Day 2017. Learn more and sign up!