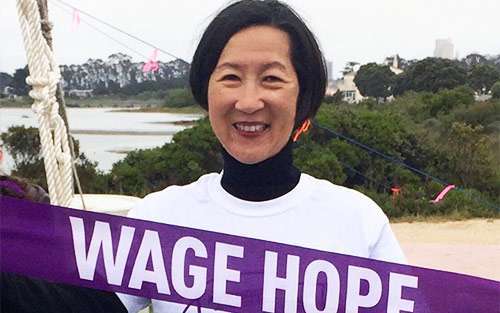 Cathy Quon is a 15-year pancreatic survivor and year-after-year top fundraiser at PurpleStride San Francisco, the walk to end pancreatic cancer. She shares how she has managed to beat the disease and raise substantial funds for the cause. 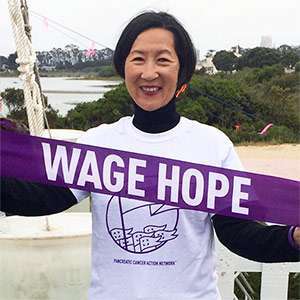 Please talk about your journey with pancreatic cancer.

I was diagnosed with the disease in 2002 when I thought I had an appendicitis after eating lunch at work. I had been having some back pain, which I attributed to exercise.

It took a few weeks for Stanford University and UC-San Francisco Medical Center to confirm that I had a neuroendocrine tumor. It was the size of a large grapefruit and had wrapped around a major artery. My first surgery to remove the tumor was in July 2002 and was very precarious. I was in ICU for a month.

Since that time, I’ve had several recurrences that initially were dealt with via laparoscopic surgery. After that was no longer an option, my oncologist switched me to oral chemotherapy, which I’ve been pretty successful with. My last oral chemo drug shrunk my tumors by 15 to 20 percent. I am off the chemo unless something starts to grow again. 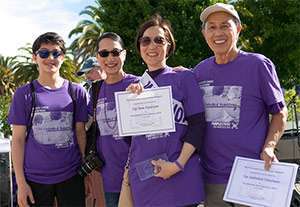 I feel super blessed to be thriving and living a full, normal life. For me, it’s important not to be defined by cancer. Even with my husband in our darkest times, we focused on one day at a time. My dad’s favorite saying is “think positive,” and we try to live by that motto.

How did you find out about PurpleStride and what made you want to join?

We first started participating in the PanCAN walks in Golden Gate Park, which eventually became PurpleStride. Then we participated in the PanCAN San Francisco Affiliate for years under the wonderful leadership of Michele Monhart.

What motivates you and “Team Quon” to continue to fundraise for PurpleStride every year?

Knowing that I am a long-term survivor when so many are not motivates me to find better treatments and strengthen outreach programs for patients. Every advance can save lives. It’s a terrible disease that can snatch people away in just a couple of months. 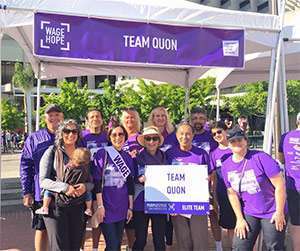 What are some of the things you and your team do to fundraise for PurpleStride?

Just reach out to everyone you know, repeatedly, and plead the case. The funds are not for you, it’s for the cause. Don’t be embarrassed to ask for money.

Have you been involved with PanCAN in any other ways?

What would you say to give hope to families and patients who are currently battling pancreatic cancer?

You are not a statistic. Don’t get overwhelmed by the stats but focus on what you can do. Don’t leave any stone unturned. Be your own advocate – no one is going to care more about you than you.