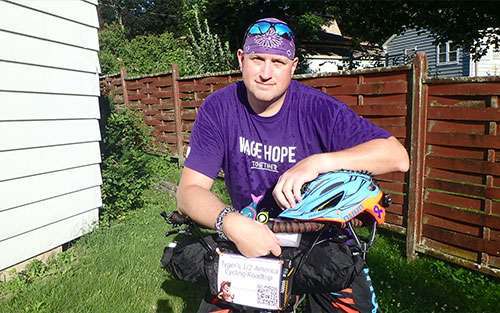 After 20 years away from biking, Rob ‘Tyger’ Rubin climbed back onto the saddle. He trained for a year for ‘Ride Across Wisconsin’, a 175 mile, one day event – which he describes as “one of the most brutally fun things I’ve ever done.” 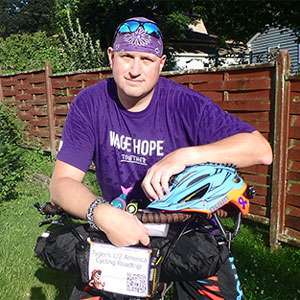 Meeting other riders got him interested in bike camping and long distance tour riding. On Aug. 4, Rob will depart Seattle for a 2,667 mile, two-month route to Milwaukee, using Wage Hope My Way to raise funds for the Pancreatic Cancer Action Network.

What’s his driving force for fundraising? Rob lost both his mom and dad to pancreatic cancer.

“The last time I saw my dad, he asked me what I was going to do with the cycling stuff,” Rubin said.

“I showed him some pictures of the October trip, and then this crazy map I had put together of a half-country ride I wanted to do someday.  He wished me luck, and he said he hoped I could do it.  Two days later he was gone.”

Rubin’s mom was diagnosed in 2001 and fought for nine months. When Rob got the call from his dad in 2015 about his diagnosis, his reaction was disbelief. His dad fought for 18 months, through a Whipple Procedure and chemo. Rob says that despite the pain, he considers himself lucky that he had more time to say goodbye than others.

“Of all the gifts my parents gave me, it’s the gift of wanderlust that I treasure the most. I don’t intend on wasting it sitting at home playing video games, “Rubin said. 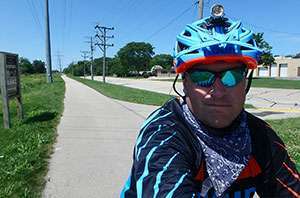 He is putting that gift of wanderlust to use to benefit the Pancreatic Cancer Action Network. “I’m hoping people see me on the bike, ask questions and donate to help fund research and clinical trials,” he said. “Having witnessed it twice, I want to do something so that another child doesn’t have to lose both parents to pancreatic cancer. I hope that through efforts like this, someone can hear their doctor say ‘You have pancreatic cancer, but we have an effective treatment for it. You’ll be ok.’ That hope pushes me forward.”

“On one ride I was literally stopped, or slowed down, by people who wanted to hear the story or ask what I was doing,” Rob continued. “I’m hoping I can use that to help someone I’ll never know win a fight against pancreatic cancer.”

Rubin also wants people to know they can have just as much of an impact without doing a 2,667-mile ride. “Take part in PurpleStride,” he said. “Fundraise, volunteer – it doesn’t take a big gesture to make a big difference.”

Rob’s ride kicks off with an interview on CBS 58 in Milwaukee -- watch it now.

Are you a biker? A swimmer? Running a marathon?  Launch your own Wage Hope My Way fundraiser to help end pancreatic cancer.