Pancreatic Cancer News  Stories of Hope  It Starts with Someone: Vittoria Larrick

It Starts with Someone: Vittoria Larrick

Editor’s note: For each of us involved in the cause, it started with someone — the reason we were compelled to get involved with the Pancreatic Cancer Action Network (PanCAN) and change the story of pancreatic cancer. Today’s article is about PanCAN staff member Vittoria Larrick and her “someone” – her late father, who passed away of pancreatic cancer when she was a teenager.

“We were in the process of moving to a new home when we got a call from the doctor. We were in shock and disbelief,” said Talli Robinson. “Our next reaction was to kick into gear, figure out how to tell our children, Tori, 13 years old and Tate, 9 years old, figure out medical options, and begin praying for a miracle.”

The dust had yet to settle in the Larrick’s new home – no photos were on the walls, no decorations had been placed, and boxes were still to be unpacked. Robinson, and her husband, Tim Larrick, sat their two children down around the kitchen table. There was no perfect way to tell their children dad was sick and may not be around much longer, so they decided to approach the situation with honesty.

Tim Larrick faced his children and told them, “I have pancreatic cancer.”

The collateral damage that comes along with a cancer diagnosis is not often considered. Along with patients, many diagnoses greatly affect friends, spouses and children. Vittoria Larrick felt these effects when her father shared his diagnosis with her and her brother, shortly before her 14th birthday.

“I remember just having a hard time; I knew cancer was bad,” said Larrick.

Dealing with the illness of a loved one is tough for anyone, but it can take a worse toll on those who are too young to fully comprehend the ramifications.

This situation became a bit more bearable when she was given a purple, hardbound journal from a family friend, Lucy, who urged her to communicate her emotions through writing.

“It was absolutely a therapeutic release. I would write to the journal saying, ‘This is the only place I’m able to say this,’ or ‘This is the only person that’s not going to talk back to me,” she said. “It was really helpful for me to be able to have a safe space to write. It was the one place I really felt safe getting everything out.”

The Larrick children responded to their father’s illness in separate manners. “Initially they were sad and confused and needed hugs,” Robinson said. “They reacted differently because of their ages, as it became more real.”

While her brother shut down and responded by not showing much emotion. Larrick tried to distract herself and pretend that everything was ok, not revealing her feelings to anyone but her journal. 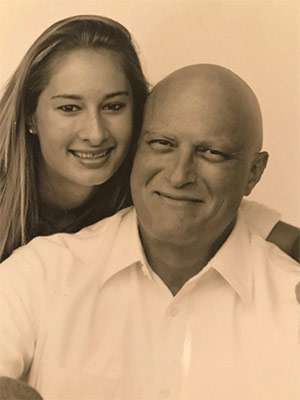 Vittoria with her father, Tim Larrick.

“That’s what the journal was about. I was trying to escape this reality that I had at home and what was actually going on,” she explained.

Larrick appreciated her parents’ honesty in delivering the news of her father’s illness. She explained the news wasn’t sugar-coated, which she felt was helpful. Her parents did not hide things from them, they were upfront, which led to Larrick being involved and knowing much about the process.

“I was documenting his scans, how his chemo[therapy] was working, what his side effects were, how he was responding to treatment, his emotions, how some days were more challenging for him, days that he would cry, days that he was angry and days that we would be in the hospital – I was aware of more than I realized.”

Being equipped with the knowledge of her father’s illness, along with the confidence and support she gained from her journal, led Larrick to co-facilitate a teen support group for children whose parents were diagnosed with cancer.

“This journal gave me the push to reflect inward and seek help and connect with peers that were going through the same thing,” Larrick said. “I made amazing friends, got involved, I got support, and I was seeing a counselor. I might not have been as inclined to reach out for all those resources had I not been paying as much attention to my thoughts and feelings, and that’s what the journal helped me do.”

In March 2018, Larrick returned to her childhood home in Santa Barbara. Now, there are photos on almost every wall, there are no unpacked boxes, and the somber feeling of hearing the diagnosis is gone – as is her father, Tim. He passed away in May 2004 due to pancreatic cancer. In his last year, the family celebrated his life with a litany of family trips to places he always wanted to visit. This built memories that will last the family a lifetime.

Their father’s passing weighed heavily on the children. However, time has healed most of the wounds opened by pancreatic cancer. What is now left are calluses and scars that bear a reminder of strength, perseverance, communication and a great father lost too soon.

On her trip home, Larrick found the journal that granted her strength, not only to help herself but to help others. Opening the purple journal and seeing her small, precise handwriting peppered throughout the pages in different colored ink brought back a wave of emotions, good emotions.

“Finding this 15 years later is just as therapeutic. It was really cool to be able to find these memories and be able to check in with myself from back then and see what was going on,” Larrick said.

Larrick, now 28, has a career in social services. She credits finding her love of helping others to her journal and thanks Lucy for pushing her to write. “I don’t know if I would’ve started a journal if Lucy didn’t do that.”

Through her job, she has spoken to many people who went through or are going through a similar situation that she was in. Larrick urges all going through a tough time to find something that makes you, you. Find your safe place.

“For some people it’s journaling; for some people it’s exercise, for some it’s counseling – everyone needs an outlet,” she said. “Everyone is in a different place in terms of how they process things. I think it’s important for children and everyone affected by cancer to know that it’s okay to be fearful, uncertain, sad, angry – all of these emotions are normal and okay, it’s just a matter of what works best for you and finding your safe place.”

PanCAN’s PanCAN Patient Services can provide resources about how to help children cope with cancer in the family. In general, reassure children of all ages that no matter what, they will be loved and cared for. Also, be honest and concise: the most important thing to communicate is your willingness to be honest.