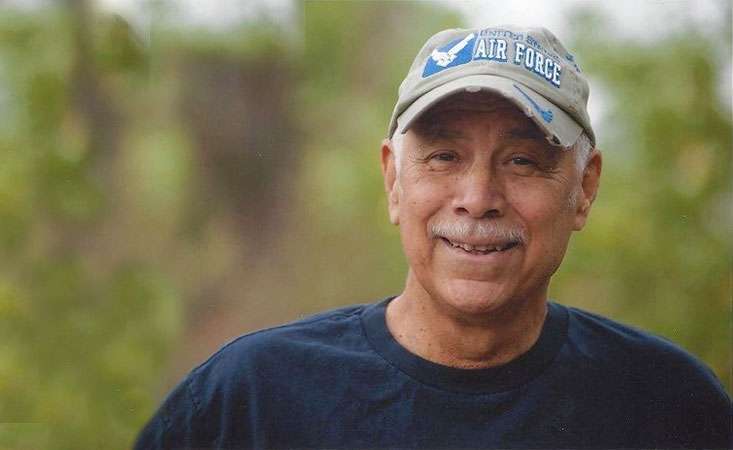 Editor’s note: Rich Valdes passed away in July 2019, but his legacy lives on through his dedication to PanCAN’s Silicon Valley Affiliate – and beyond. We hope his story inspires others to get involved in the cause on behalf of everyone facing pancreatic cancer.

Pancreatic cancer survivor Rich Valdes knew when he was facing the world’s toughest cancer, he had to fight back.

Valdes was diagnosed in 2013 and has experienced multiple treatments and a reoccurrence. His cancer spread, but thanks to a new chemotherapy treatment, 17 tumors throughout his body appear to have been reduced down to four, according to a recent CT scan.

Facing difficult situations is not new to Valdes. He is a veteran of the U.S. Air Force and is accustomed to difficult missions and challenges. 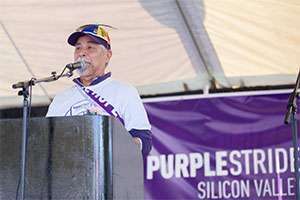 “After 20 years in the Air Force, pancreatic cancer is just another one of those challenges that you deal with head on,” he said.

Valdes got involved with the organization because of his wife and daughter. They came across PanCAN when they were looking for clinical trials. He has been a big supporter ever since and explains that, like the military, volunteering gives him a strong sense of community and an interest in helping others.

“In the Air Force, I always had the feeling of being part of a large family or brotherhood and you do what you can to help each other out. “It’s the same with how I’m involved with PanCAN – you just do what you need to help,” Valdes said.

Valdes has been an enthusiastic fundraiser, too. He led the “Rich’s Air Force Squad” team for PurpleStride Silicon Valley. The team is more than halfway to its $10,000 goal.

Valdes sees fundraising as a critical way to make an impact and commits to raising the necessary funds to beat pancreatic cancer and help other survivors. 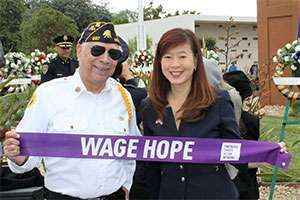 Valdes snapping a photo with the mayor of Fremont, Calif., Lily Mei

“PurpleStride is where we can make a real impact. Our five-year survival rate is improving and so is the standard of care. “Researchers are on the verge of finding new therapies that will give us more time. And it’s only through clinical trials that I can stand up to pancreatic cancer and destroy it for good,” Valdes said.

“Many [survivors] before me came by raising funds for research and I believe I have benefited from that. It is only right that I do the same for those who will be diagnosed in the future.”

His dedication to his country and now his dedication to fighting pancreatic cancer is something that will remain his focus. He’s determined to not only make a difference for himself, but everyone affected by the disease.

“When you are assigned a task, you have only one option and that is to complete the task. You are not allowed to give up, especially when others are depending on you.”

Check out how you can make an impact like Valdes by participating in your local PurpleStride.