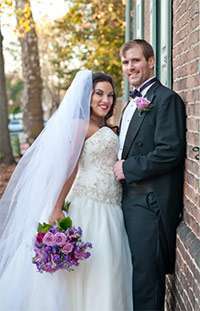 Volunteers David and Lauren Annal got married on November 13, 2015, which also happened to be World Pancreatic Cancer Day.

They figure their paths probably crossed dozens of times over the years, but it was pancreatic cancer that would finally, truly, bring them together.

Proof that something positive can and does come from heartache and loss.

For Delaware Affiliate volunteers David and Lauren Annal, who met through their involvement with the Pancreatic Cancer Action Network in Philadelphia, neither was expecting to find anything more than a way to make a difference in the fight against the disease.

But the universe had other plans.

Said Lauren, the Donor and Corporate Ambassador for the Affiliate, looking back on their separate but nearby paths: “We had many mutual friends because we went to the same high school and college, but we never really knew each other that well.”

“We were Facebook ‘friends’ but not really close friends – we all know how that goes,” Lauren said.

In 2011, Lauren started working in Philadelphia and moved to the suburbs. She got engaged and joined the Philadelphia Affiliate. Although the engagement ended a year later, she stayed in Philadelphia and remained involved with the Affiliate as Teams Chair. In this role, needing to create awareness for the upcoming November 2013 PurpleStride in Philadelphia, she remembers going the tried-and-true Facebook route for drumming up publicity for the event.

It was there that she caught the attention of David, whose mother had passed away from pancreatic cancer in 2011 after a four-month fight.

“He was participating in PurpleStride Philadelphia in honor of his mother, and he asked to join my team,” Lauren said.

The night before PurpleStride, the two met up so she could give him his event day packet, running bib and T-shirt.

“I didn’t think of it turning into anything,” Lauren said.

But they did realize during their conversation and catching up that their lives had taken remarkably similar paths. “Since we hadn’t seen each other in years, we chatted for a while.

“It turns out he had been engaged at the same time I was, and had also called it off,” Lauren said.

That night David asked her out to dinner. 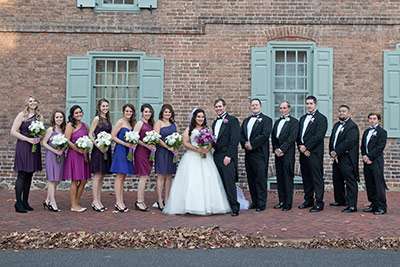 It’s time for a purple wedding! David and Lauren Annal with their wedding party.

After a successful PurpleStride and a first date a few days later, they continued to date. And less than a year after their chance meeting, they were engaged.

During the wedding planning, Lauren and David experienced another interesting turn of events…

“We reserved a venue for Friday, November 13, 2015,” Lauren said. “Even though I’m not that superstitious, I wasn’t crazy about getting married on Friday the 13th, but because Fridays are a less expensive day to have a wedding, we decided to go for it.”

They didn’t know it at the time, but November 13 would be special for another reason – it was World Pancreatic Cancer Day.

When they’re not volunteering with the Delaware Affiliate, that is.

Are you interested in volunteering? While we can’t promise you’ll find your perfect (romantic) match if you do, we can guarantee we’ll help you find the role that best matches your interests and skills! Join us as a volunteer today!