Home Our Hearts Are In It Because… Everything I do, I do for my dad 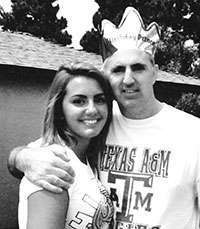 Cheyenne with her dad on his 45th birthday in 2007 – two months before he passed away of pancreatic cancer.

Like most little girls, my first love was my daddy. He was my number-one fan and my biggest supporter. He was also my first heartbreak.

In July 2007, he sat my siblings and me down in our quaint living room, quietly spilling the news that he had pancreatic cancer. Stage four, to be exact. What did this mean? I had no clue. I’d never known anybody with cancer, let alone knew that there were four stages to it. But when I saw my mom break down in tears, I knew that whatever this meant, it wasn’t good. My dad was a healthy 45-year-old who worked in the oncology field. How could this have happened to him without him knowing? How could this be happening to me?! I was only 16.

I remember immediately wanting to shower. Almost like I needed to clean myself from the pile of dirt that my family had been unwillingly shoved into. Before I hopped in the shower, my dad slightly opened the bathroom door, looked me straight in the eyes and said, “Don’t worry, we got this.” Then, like always, he gave me knucks – that was our thing. And like any daddy’s girl would, I believed him. 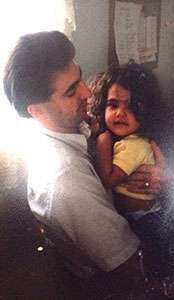 Cheyenne as a baby with her first love, her dad.

Months flew by and his chemotherapy and radiation treatments were in full force. He experienced long days of treatment, and even longer nights of cold sweats, vomiting and pure discomfort. For so long he had been the rock of our family, and now it was us who needed to hold him up – literally. Even still, he remained positive and every time I asked him how he felt, he had the same response: he smiled and said, “Great!” Then, like always, he gave me knucks.

Less than four months later on Nov. 4, 2007, I woke up and got ready for work, just as I had done every other Sunday. My dad was happy, talkative and even walking laps through our house. It was unusual for him to be so energetic but, as always, he gave me knucks. I had no reason to worry, so I left for work.

A few hours into my shift, I received a frantic phone call from my sister. And with that call, I felt my heart break for the first time. The most beautiful soul I have ever known was stolen from me that day, and I didn’t even know it was coming. After all, my dad always gave me knucks. Everything was supposed to be alright.

For the longest time I couldn’t fathom why he didn’t tell me what a diagnosis of stage four pancreatic cancer meant for him. I know he knew. I know he had experienced the same symptoms and dealt with the same diagnosis that he saw day in and day out with his own patients in the oncology department. It wasn’t until I was blessed with a daughter of my own that I finally understood him. I finally am able to feel what a parent feels for their child. I finally feel what he felt for me – an eternal love that never falters, even when we are weak. 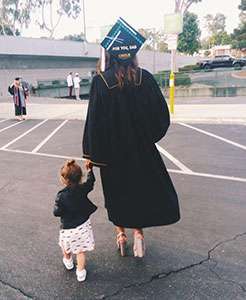 Cheyenne and her daughter Paisley after college graduation in June 2015.

My dad loved me from the day I was born to the day that he died. He loved me more than he loved himself. And that – that love – is why he always gave me knucks. He wanted me to believe that everything was going to be okay because my happiness was more important to him than anything in the world – even when he knew his own life was coming to an end.

I can never repay him for his selflessness or for his undying love. How do you ever repay a man whose biggest priority was to love you, to care for you, and to make you happy until the day he took his last breath? It’s not possible. All I can do is thank him.

So thank you, Daddy. Everything I do, I do for you. My heart remains dedicated to this cause in honor of you and your fighting spirit. I love you. Toujours et toujours.