Home Our Hearts Are In It Because… Justen and Katie Meyer: Once Upon a Time in Dallas… 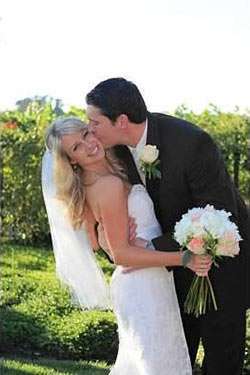 Justen and Katie Meyer seizing the moment on their wedding day.

It’s not uncommon to hear about coworkers falling in love. But Justen and Katie Meyer’s story has a twist.

At the Pancreatic Cancer Action Network’s annual Community Engagement Leadership Training (COLT) conference in March 2011, Justen, a volunteer leader with the St. Louis Affiliate, and Katie, an employee at the Pancreatic Cancer Action Network, congregated in Dallas with fellow volunteers and staff for a long weekend of comradery, learning and fun.

During the hustle and bustle of the arrival of some 400 volunteer leaders from across the country on the first day, Katie and fellow coworkers noticed Justen as he entered the hotel. “Some of my coworkers were asking me if I had seen him because apparently he was tall and handsome. The moment I saw him, I had to agree,” Katie said.

During COLT activities, it seemed Justen noticed Katie, too. He peppered her with questions all weekend.

“He asked me about getting involved in the TEAMHOPE volunteer program I managed, explaining that he wanted to fundraise for the Pancreatic Cancer Action Network while training for the Chicago Marathon. Later he asked me a question about the awards dinner, and probably a few others. We ended up having some great conversations,” Katie said.

Conversations that quickly turned to their love of baseball.

“When the weekend was over, he waited for me at the airport by my gate to say goodbye,” Katie said. “The very next day he sent me flowers. I had a feeling it was all meant to be.” 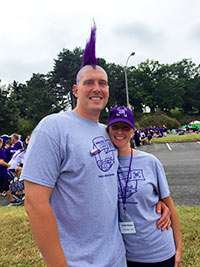 You can’t Wage Hope without a purple mohawk! Katie and Justen at PurpleStride St. Louis in 2015.

They met up in Los Angeles two weeks later and drove to northern California to watch the Cardinals play the Giants.

After the game they continued dating. When Katie was in New York City with TEAMHOPE runners for the New York City Marathon that same year in November, Justen surprised her and proposed.

They got married on July 14, 2012 and they live in St. Louis. They spend a lot of time cooking together, going to and watching sporting events and often find themselves still cheering for opposing teams. They travel, watch Netflix, work out together and spend time with their dog, Penny.

And they both continue to volunteer – Justen as Affiliate Chair and Katie as Volunteer Chair – as a way to honor the memory of Justen’s father.

“Pancreatic cancer stole Justen’s dad too soon,” Katie said. “Volunteering enables him to fight back against this disease and allows me to honor someone I never was able to meet.

“We dedicate a lot of time to volunteering, and we’re very lucky that this is also time spent together. It’s such an integral part of our lives that I honestly can’t imagine our lives without the Pancreatic Cancer Action Network.”