Home Our Hearts Are In It Because… My Heart Is in it for Elena, and Keeping Her Cells Alive 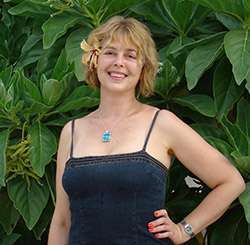 Two years before her diagnosis, Elena and Igor vacationed in Fiji.

Elena and I met in Moscow in the mid-1990s. Both of us were practicing oncologists. It was a tumultuous time there, as the Soviet Union was crumbling, so we made the joint decision to relocate to the United States and undergo the daunting process of transferring our Russian medical degrees to become licensed to practice in America. Our training took us to Philadelphia, where we both got positions at Fox Chase Cancer Center. Elena’s focus was on leukemia and mine was gastrointestinal cancers. Little did I know that we’d soon be fighting for her life against one of the very diseases that I studied in the lab and treated in the clinic.

In the spring of 2012, Elena experienced constant intense abdominal pain, and as an oncologist herself, she scheduled and reviewed her own CT scan. She immediately noticed the spot on her pancreas and several lesions in her liver – and knew that she was looking at metastatic pancreatic cancer.

I’ll never forget the phone call when she shared the news. Nor will I forget what happened next – she was slated to speak at a seminar for her leukemia patients. As I rushed to be by her side, I watched her flawlessly deliver her talk with her usual poise, compassion and dedication to her patients. 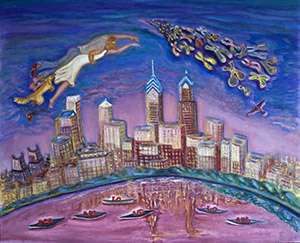 During her pancreatic cancer treatments, Elena taught herself to paint. She immersed herself in this project – depicting her vision that genetic research could lead to a breakthrough in pancreatic cancer. Today it hangs in Fox Chase Cancer Center.

She and I were the only people in the room who had the slightest clue that something was very, very wrong with their beloved doctor.

We notified Elena’s son, Sergei, who was living in Toronto at the time. I strongly encourage you to read Sergei’s story  – I am in awe of the love he had for his mother and the amazing choices he has made to honor her memory in his professional life.

Within a few days of Elena’s diagnosis, we had a piece of her tumor implanted into mice in my lab to form pancreatic tumors. Prior to her diagnosis, my lab’s research was not focused on any one cancer type – but since, I’ve become completely dedicated to studying pancreatic cancer. Feeling an incredible sense of urgency, we grew Elena’s cells in the lab, sequenced their DNA and ultimately were able to test a large number of chemicals looking for active compounds that might stop or slow the cells’ growth. We were frantically testing drugs on the mice, trying to gather clues to determine the optimal treatment plan for my dear Elena. 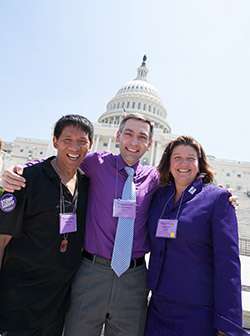 And through it all, she continued to see her patients.

All too quickly though, we ran out of time and Elena passed away from pancreatic cancer in the spring of 2013. She had been very comforted to know that her cells would continue to live on in my lab – and today we have a robust “mouse hospital” of animals implanted with many patients’ pancreatic cancer tumor samples. I remain fully committed to fighting pancreatic cancer in the lab and the clinic, and I plan to remain as active as I can with the Pancreatic Cancer Action Network – by attending Advocacy Day and PurpleStride and not missing any opportunities to support our shared mission.

And I am beyond proud of my stepson, Sergei, for his efforts to join the fight against pancreatic cancer and further honor his mom’s memory.

Our hearts will always remain with Elena and we will do whatever we can to alleviate the suffering of other families impacted by this disease.

When I look in the microscope today, I don’t simply see Elena’s cancer cells. I see her legacy.