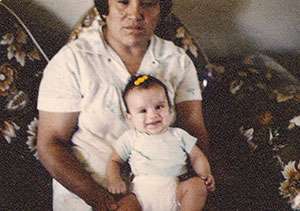 The author and her late grandmother.

Grandma wasn’t quite ready for me when I was born. She had many hopes and dreams for Mom.

Like all parents, she wanted her children to have what she didn’t have. I’m sure she would have liked for Mom to have postponed motherhood. Not only that, I don’t think she liked the term “Grandma,” but oh well, the time for me to arrive had come and there was no turning back! (Although I’m sure there were times when she and Mom would have liked to have returned me.)

As time went by she became a bit more accepting of the situation. I would like to think I broke her in for my (much) younger cousins. I think she enjoyed being a Grandma more than being a mom! In our case if we annoyed her she could just send us away.

She and I did not have your typical grandma/granddaughter relationship. We actually lived together off and on throughout my life. Despite our sometimes comical moments of culture clash (the knocks on the bathroom door because I was taking too long, the banging on the bedroom wall because my music was too loud – I guess she was not down with Metallica), we loved each other.

Fast forward to 2008. I come home one evening from my part time teller job at a local credit union to a full house. This was typical of our family. Everyone hung out at Grandma’s. This time it was different. Grandma had not been herself. The once very active busy body seemed to be in bed more, lying on her belly. If you knew my grandma this was NOT her. Something was wrong. At first we thought she must have eaten something her tummy didn’t like during her recent vacation.

Later that same evening, one of my cousins (15 years old at the time) and I decided to go get ice cream. On the drive there I got the news.

“My mom was on the phone with Aunt Emma and started crying,” she said. “Looks like Grandma has cancer, and it is one of the worst…I think it’s in the pancreas.’’

Aunt Emma was the main caregiver for both my grandparents and had been the first to get the news from the doctor. I could not believe my ears. I felt like someone had spilled a bucket of ice water on me. We always worried about other health conditions, like her heart, but cancer?!? We had no prior family history.

Once we came back I called Mom, who was at work. She confirmed the bad news. The doctors said she would not make it to Christmas. This was late May, so they gave the basic six- to 12 months of survival prognosis. They highly recommended she get her affairs in order. They tried to operate but they couldn’t even get a needle in there. The cancer had metastasized. The evil disease took her Tuesday night, June 2, 2009, just over a year after diagnosis.

My life has taken a complete 360 since then. Boy have I had to grow up! I soon had to job hunt for a full-time job. At the recommendation of a friend, I went on Craigslist and found a posting for a position at the Pancreatic Cancer Action Network in the accounting department. The position involved gift processing. “I can do that,” I thought. Plus, I was supposed to be an accounting major, and I had just lost my grandma to the disease about five months earlier. It was the perfect opportunity and came at the right time.

I feel very blessed to have had Grandma as long as I did. Today I can’t help but think about how much my (much) younger cousins are missing out. I’m also very grateful for the opportunity to play a small role in this organization’s effort to battle pancreatic cancer.

You simply CANNOT put a price tag on the valuable information we provide to families, caregivers, patients and medical practitioners during such a dark period.