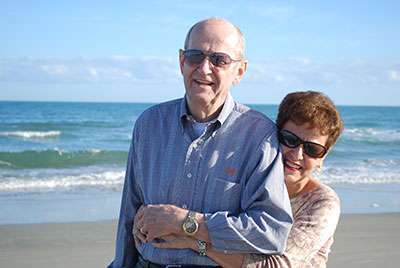 Jack and Barbara Maffett at Litchfield Beach, S.C., in October 2009.

My husband, Jack, and I were always content simply hanging out together. It didn’t take much to entertain us. We loved being with each other, and it didn’t matter where we were. Although occasionally we’d treat ourselves to a short trip to the N.C. mountains or our nearby beaches, we were just as happy being at home. Friends said we were joined at the hip.

It’s been a very hard journey without him. But Jack had an unfalteringly positive attitude and a strong faith. Both rubbed off on me! And he made an impression on many during his lifetime. When he passed, I felt I owed it to him to make sure his legacy lived on.

I decided to honor Jack by making a legacy gift to the Pancreatic Cancer Action Network: A percentage of my estate will go to the organization upon my death. I’m actually leaving two charitable bequests in my will – the other is for my church, following Jack’s wishes.

Our estate isn’t worth a lot of money, but this is my cause, my calling. It made me so angry and hurt when I learned that pancreatic cancer research is the least-funded type of cancer research, and yet the disease is one of the most deadly. That’s an injustice.

Therefore, I feel very strongly that even after I’m gone, I have to continue to support the Pancreatic Cancer Action Network’s work.

Two days before Jack’s death, on our wedding anniversary, I made a donation to the Pancreatic Cancer Action Network in his honor, and they sent me a certificate. When I showed it to Jack, he became very emotional.

He said, “I’m blown away that you did this. There’s nothing else you could have given me that would’ve meant more.”

Since then I always make a donation to the Pancreatic Cancer Action Network on Jack’s birthday, on our anniversary and at Christmas. But it feels very good to be blessed enough to be able to make a legacy gift in honor of my beloved husband as well.

People have said that Jack and I had the gift of time. Yes, we had 19 months together after his diagnosis. We were lucky, I guess, because many other pancreatic cancer patients don’t get that kind of time.

But the truth is, you never really have enough time. Time is one of those things you don’t dare take for granted.

About 18 months ago, I received my own sobering diagnosis: stage IIIC ovarian cancer. It’s another silent, deadly disease that doesn’t generally offer patients a lot of time, ironically. Doctors said I might live up to a year without treatment after my surgery.

I opted for no treatment, and as of today, I’m still in remission and I feel good.

I’m not afraid of what the future holds.

I feel secure knowing that while I’m here, and after I’m gone, I can support a cause that’s important to me.  And that Jack will live on in this very special way.

He would be deeply touched to know that I continue my fight on his behalf. I’m proud I can do this for him and for future generations.